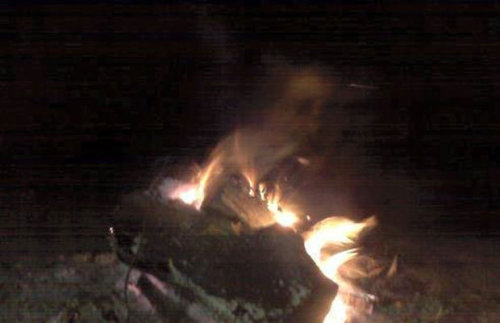 Woman Photographs a Ghoulish Entity Emerging from a Campfire.

This eerie image was captured an Asheville, North Carolina resident named Miranda S. She claims she took the photo with her mother’s Blackberry while the two were at the Asheville fireman’s camp. At the time, neither of the two knew of the horrifying evidence Miranda had inadvertently captured.

Hours after arriving back home, Miranda says her mother suddenly woke up at 3 a.m. screaming about how she had a dream of a man who told her to look at the fire. The two quickly grabbed the Blackberry and began sifting through the numerous photos Miranda had taken at the camp sight (about 130 in total).

Eventually, the two came across this image, which appears to show a wailing, hollow-eyed entity emerging the campfire. Appearing on the right hand side, directly next to the entity’s head, is a bearded man’s face. It’s been speculated that the bearded man could be the spirit of a Civil War soldier.