WHITE HILL MANSIONNew JerseyOne of the most haunted locations in… 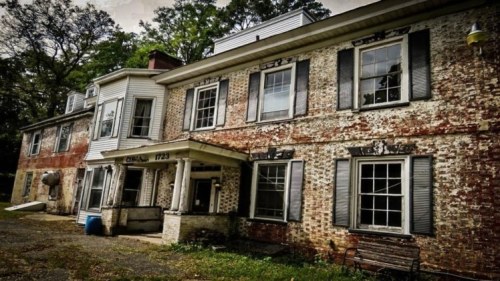 One of the most haunted locations in New Jersey is a home that is nearly 300 years old. The White Hill Mansion has served as a family home, bordello, speakeasy, restaurant, and office building throughout the course of its existence. The spirits that still lurk in the shadows are eager to share three centuries worth of secrets and it doesn’t take much effort to get them to speak! As featured on Paranormal Lockdown, the haunting of White Hill Mansion is known as one of the most active locations in the Northeast!

Robert Field II inherited White Hill from his father in 1757. Robert was deeply involved in the Colonial Efforts leading up to the Revolutionary War and suddenly died under mysterious circumstances by drowning in the Delaware River in 1775. Mary, his wife, was left to run the property and raise three young children during the war. Her neighbors gladly sold her out as a rebel sympathizer leading the British to seize the property and use it as temporary quarters.

The troops that occupied White Hill were the Hessian Army. One of the most common paranormal experiences is the German accented voice coming from the attic. Could it be one of the troops that made themselves at home during the Revolutionary War? Or perhaps its Heinrich Glenk who opened an upscale German restaurant with his wife at White Hill in 1923?

Many guests that visit White Hill talk about seeing a shadow figure that lurks around the basement. The figure creeps up next to people and then slinks back into the darkness. He has no respect for personal space. Others report disembodied voices, the sounds of children playing, footsteps up and down the stairs, EVPs captured of a talkative woman who claims to be a former servant, a full-bodied apparition of a woman that many believe to be Mary Field watching sternly over the house, lights turning on and off of their own volition, objects being moved and hidden, a spirit that tugs on people’s clothing, a lighthearted prankster that enjoys toying with guests—the White Hill Mansion is a paranormal enthusiasts’ dream!

Over the centuries, White Hill Mansion has served as a family home, housed rum smugglers during prohibition, served as a bordello and speakeasy, a restaurant for over 50 years, an office building and now as a beacon of history full of secrets. During the restoration of White Hill, they conducted two archaeological digs that uncovered 30,000 artifacts leading to the speculation that the property itself was built on an ancient Native American settlement. With all of the history, it’s no wonder that White Hill is one of the most haunted houses in New Jersey.

WHITE HILL MANSIONNew JerseyOne of the most haunted locations in…