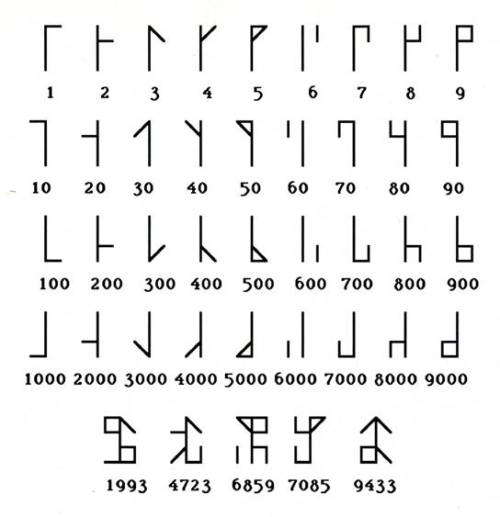 this is…. actuallly really cool?
like, this is probably the shortest number notation in existence and yeah, it’s tricky to use and absolute hell for doing math with, but the ability to denote a 4-digit decimal number into a single character is just really cool as an engineer and it probably had a ton of uses back then like denoting quantities or maybe even secret code
you can probably draw this on a combination lock to remember the password and people would be none the wiser

Doing maths as a child, I spent all my time following patterns: in that sum and that sum if you subtracted three and added the top left number you got the same answer as if you did it the way the teachers wanted you to. Is that a new way of doing maths? I always wondered if there were branches of maths that they’d missed and I’d stumbled across. It wasn’t that I was inherently bad at mathematics. I was just too distracted trying to discover hidden numerical pathways to be quick at arithmetic… Maths was so abstract that I spent all my time trying to carve my own hexes to make it work for me, instead of just following the rules I’d been given. I both love and hate this numerical system simultaneously.