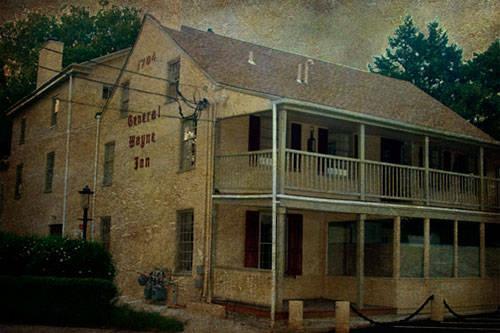 Numerous ghosts have been experienced and apparitions seen in this inn that had been in continuous operation since 1704. Originally called The Wayside Inn , it was renamed in 1797 after the Revolutionary War, and it has been visited by such notables of the time as George Washington and LaFayette. Many other famous guest have stayed there, including Edgar Allen Poe, who wrote part of his famous poem The Raven there. In 1996 owner Guy Sileo murdered co-owner James Webb on the third floor of the building on the day after Christmas in a dispute over finances. But it might have been Silio’s mistress, Felicia, who killed Webb because he disapproved of the affair. Felicia later committed suicide.

Unfortunately, the inn closed around 2004 and and since been converted into the Chabad Center for Jewish Life, although “General Wayne Inn” is still displayed on the building’s side.

Ghosts:  The haunting activity reported in this building has been substantial over the years: