The Walker HouseIn 1842, a man named William Caffee was living… 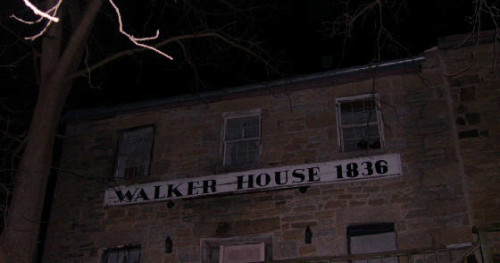 In 1842, a man named William Caffee was living in Mineral Point. There was no question that Caffee was an arrogant and violent man. He was known as a notorious alcoholic, a brawler and a thief.

During an argument with another man outside Walker House, Caffee pulled out a gun and shot the man in the heart, killing him instantly.

Caffee was charged with murder. The jury found him guilty and the judge sentenced him to hang. The sheriff had to hire 4 men to guard the jail because Caffee had threatened to kill everyone in town if he got loose.

When they asked him what he wanted for his last meal, Caffee asked for a slice of the judge’s heart. Word of Caffee’s antics spread throughout Wisconsin and generated a lot of interest.

The morning of the hanging, a scaffold was erected outside Walker House and a crowd of 5,000 people came from all over the state to watch. Armed guards tried to bring Caffee out of the jail, but he refused to budge. They had to put him in a coffin and carry him out themselves.

As they carried to the scaffold, Caffee sat upright in his coffin and drummed out the funeral march with empty beer bottles on the wooden casket. When the sheriff put the noose around his neck, Caffee told him he wasn’t doing it right. He was an arrogant man to the end. But that wasn’t the last Wisconsin would hear of William Caffee.

The tavern lay vacant for many years, but when it was purchased by a new owner and renovations began, strange incidents started to occur. The owner heard strange sounds, heavy breathing, voices that came from nowhere and mysterious footsteps walking down the halls.

In 1981, the owner saw Caffee’s headless ghost sitting on a bench on the back porch. It was wearing a rumpled gray suit of miner’s clothing, The apparition was visible for several minutes until it suddenly vanished.

A few weeks later, a waitress saw the same ghost, this time with head, walking on the 2nd floor. The house is now closed to the public.

The Walker HouseIn 1842, a man named William Caffee was living…