The True Texas Chainsaw Massacre and the Terrible Crimes of Ed… 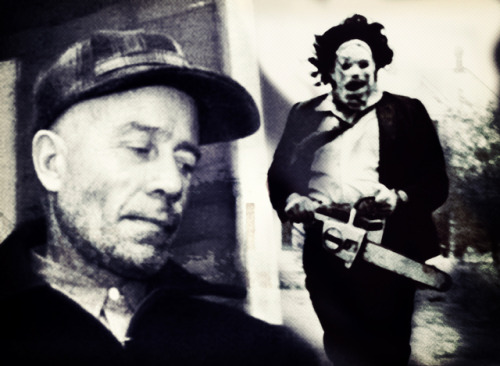 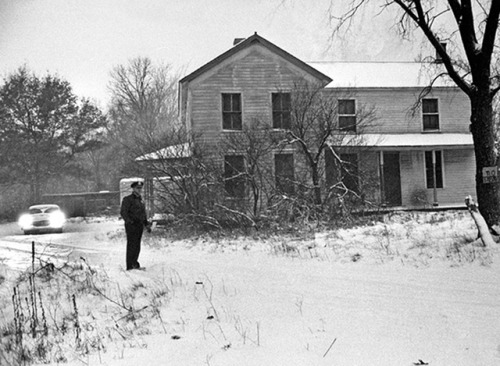 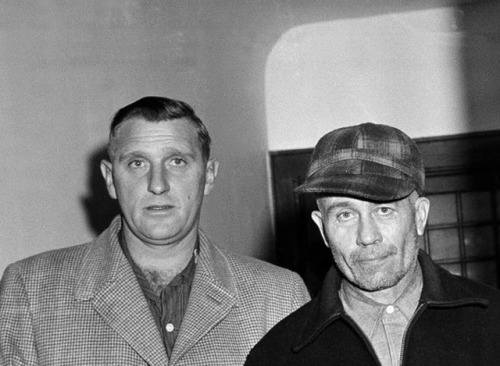 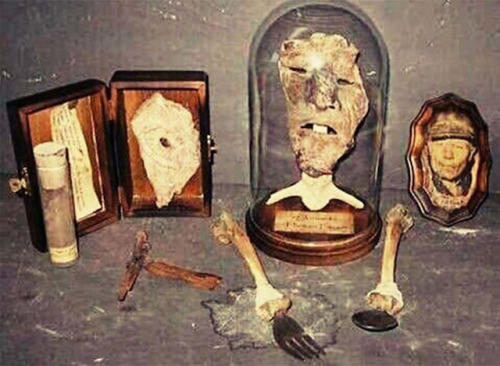 Although Leatherface may terrify in movie theatres, it was the bizarre creations of Gein’s gruesome imagination that first fixated a nation on the terrors that lie behind the most banal of small towns.

The notorious Ed Gein and his fictional counterpart Leatherface, from the horror classic Texas Chainsaw Massacre.

Many see Ed Gein’s infamous crimes as waking a nation from its own innocence, even as social change was transforming 1950s America. In particular, the discovery of this farmer’s body snatching and murdering ways woke an entire nation to the darkness swirling beneath the façade of the American Dream. His practice of making keepsakes from dead bodies and from his own victims has inspired many horror films, novels, and other stories – including the landmark films Psycho and The Texas Chainsaw Massacre. The latter specifically embodied that same sense of dread – that something so awful could be hiding in plain sight.

To this day, Gein’s terrible legacy is a reminder that the smiling faces of friends and neighbors all too often hide an unfathomable darkness – one that may be an essential part of America itself.

Edward Theodore Gein was born on August 27, 1906, in the small farming community of Plainfield, Wisconsin. Between a slight growth over one eye and his effeminate personality, Ed was regularly bullied. He found little comfort at home, though, where his alcoholic father, George, endured verbal abuse from his mother, Augusta, for being unable to hold a job. They had moved to their 155-acre farm after selling a grocery shop in the city, but he’d had little luck in keeping work as a carpenter, tanner, or insurance salesman.

August, meanwhile, enforced a strict interpretation of Lutheran teachings and regularly read biblical verses on death and retribution to her sons. She instilled a strong fear of sexuality and drinking in her two sons, along with a belief that all women were inherently evil. Furthermore, they were forbidden from having anyone over and were often punished for even forging friendships in the first place. So, it is far from surprising that, by all accounts, Ed grew up into a reclusive young man who often laughed at jokes only he seemed to hear.

Then, on April 1, 1940, George Gein died at 66 years of age when his heart gave out. The brothers began picking up odd jobs to support the farm, and their neighbors found the two to be reliable handymen, though Ed also took to babysitting on the side. Henry, meanwhile, began dating a divorced mother of two and considered moving in with her. He began speaking ill of their abusively co-dependent mother around Ed to try to pull him from her clutches, but that likely drew a wedge between the brothers, instead.

In the midst of these changes, Henry died in a seeming tragedy – or possible early sign of Ed’s homicidal tendencies. In 1945, the two brothers were managing a brush fire on their property outside Plainfield when it got out of control, and the fire department was called in. After the flames died down, Ed reported that his brother had gone missing, though he was soon found, dead from asphyxiation. The coroner did not note anything suspicious, though he later recalled that Henry had a head trauma that could have resulted from foul play.

Augusta, meanwhile, had grown to rely on Ed, as a stroke had left her relatively immobile for several years. She remained as fanatical as ever, though, with one local story telling how she witnessed a man kill a dog but focused on the fact that he invited an unmarried woman into his house. However, she too passed away in 1945, at the age of 67, and Ed was left without friends or family. He held onto their farm but boarded up the rooms that his mother had used, including the drawing room and entire upstairs.

In time, he became more and more of a recluse, with the kitchen and single room that he used becoming more and more run-down. Left to his own devices, Ed Gein only ever left the house to do occasional work for a municipal road crew or to help with crop-threshing. After selling his brother’s land, he began relying upon a farm subsidy in 1951. At the same time, his hobbies focused on devouring books about cannibals, the Nazis’ atrocities, and various aspects of human anatomy. Soon enough, he started digging up recently-buried women who resembled his mother – dissecting them and tanning skin to experiment in taxidermy. But things changed when he started hunting the living.

On November 16, 1957, Bernice Worden, the owner of Plainfield’s hardware store, disappeared – her truck having driven out of town around 9:30 AM. After the store remained closed all day, her son, Deputy Sheriff Frank Worden, entered around 5 PM to find the register open with blood on the floor and a lone receipt for antifreeze on the counter. Recalling that Ed Gein had said he’d stop by to buy antifreeze the night before, Worden pointed out the connection, and Gein was arrested that same evening.

Upon searching his family’s farm, the authorities found much more than they had bargained for. To start, they discovered Bernice’s decapitated body hanging upside down from her wrists in the shed. She’d been shot with a .22-caliber rifle and dressed out like an animal, with her head stuffed in a burlap sack and her heart sitting in front of the stove. In further examining Gein’s home, the police also found the remains of missing tavern owner Mary Hogan, age 54, who’d disappeared in December 1954. She was in pieces, as well – her face tanned as a mask in a paper bag and her skull hidden away in a box.

But that was not the end of the gore in the Gein family home. They found skulls mounted atop his bedposts, with others made into bowls. Skin had been used to create a wastebasket and chair coverings, and Gein had fashioned clothing from the dead, as well. Police found a shoulder-to-waist corset made from a woman’s tanned torso, along with multiple face masks and leggings crafted from human leg skin. Ed had stored 9 vulva in a shoebox, including 2 from teenagers, and he kept a box of noses, a belt of nipples, a face lampshade, and a window shade drawstring made from a pair of lips. All told, the remains had come from around 15 women’s bodies.

Gein told investigators that he’d regularly entered a hypnotic state and visited local graveyards on around 40 occasions between 1947 and 52. While he could normally stop himself from grave-robbing, Ed often returned home with parts of women whom he thought resembled his mother. On those occasions, he would tan their skin to make the gruesome paraphernalia discovered in his home. He confessed to robbing 9 graves and led authorities to some to demonstrate that he’d been strong enough to do the work on his own.

At one point, Gein admitted that he’d realized he wanted to become a woman after his mother had died. To satisfy his desire, he’d started to create a woman suit and had often donned the tanned skin. During the questioning, though, Sheriff Art Schley banged Gein’s head face-first into a brick wall – claiming later to be traumatized by the man’s crimes. Schley was horrified when this made the confession inadmissible in court, and he later died of heart failure just before Gein’s trial. With no confession and no warrant to have conducted the search in the first place, the accused pled not guilty and was declared unfit for trial.

Meanwhile, the people of Plainfield who had been Gein’s neighbors tried to process his actions. For some, the horror was overwhelming, including one teenager who had asked Gein about his masks only to be told that they were relics from the Philippines, sent by a cousin during World War II. At the same time, other murders suddenly seemed connected, including the disappearance of babysitter Evelyn Hartley in 1953. With Gein’s crimes highlighted on Life and Time covers, the town and the entire country were shaken to the core.

Ed Gein was eventually tried for the murder of Bernice Worden and sentenced to life in prison. However, in a second trial, he was found not guilty by reason of insanity and sent to Central State Hospital for the Criminally Insane in Waupun, Wisconsin. He was diagnosed as schizophrenic and never tried for the murder of Mary Hogan, as he would spend the rest of his life in a mental health facility either way. In 1968, Gein was sent to Mendota Mental Health Institute in Madison, where he died from lung cancer at age 77 in 1984.

Back in Plainfield, the Gein farm burned down after being auctioned off in 1958, and his car was sold to a carnival sideshow for people to gawk at. In the long run, Gein’s actions inspired a long list of fictional serial killers, too, from Psycho’s Norman Bates to The Texas Chainsaw Massacre’s Leatherface, and, most recently, Bloody Face in American Horror Story: Asylum. Each plays on the nightmares beneath the American dream, but none captures the true horror of Ed Gein’s mind – or the objects that he crafted from human beings.

The True Texas Chainsaw Massacre and the Terrible Crimes of Ed…