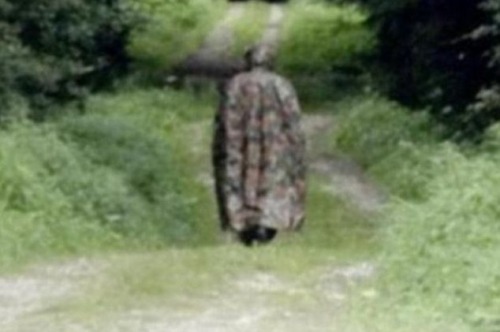 The terrifying mystery of Le Loyon

For 10 years Police in Switzerland have been hunting a ‘terrifying’ figure who has stalked Swiss woodland wearing gas mask, boiler suit and strange cloak.

The mysterious person has been photographed for the first time after apparently being spotted wandering around the patch of woodland he has roamed for the past 10 years.

The figure, who is known as ‘Le Loyon’ and has been called Switzerland’s answer to the Loch Ness Monster.

He wears a military uniform and a thick cloak, with a gas mask covering his or her face. While he does not seem to be obviously aggressive or dangerous, police are hoping to speak to Le Loyon in an effort to encourage him to be less threatening.

Tales of Le Loyon have been reported in the woods of Maules in western Switzerland for the past decade, apparently walking the same route every day.

Three years ago, his clothes were found abandoned in the woods with a note saying he was leaving the area because “The risk of a hunt for the Beast” was too great.

The clothes gave no evidence of the persons identity.

There have been a number of theories as to the figure’s true identity – a mentally ill woman, a gigantic man, or someone suffering from a nasty skin condition.

Others suggest that Le Loyon has deliberately chosen a hermit’s life, perhaps because he is a ‘survivalist’ obsessed with the apocalypse.