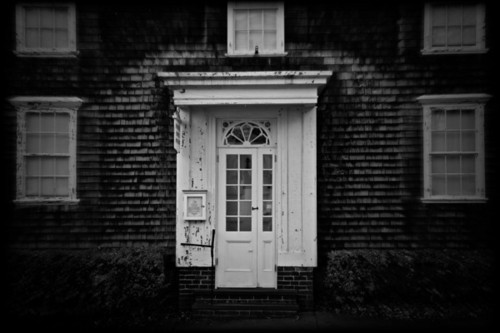 In August of 2005, a group of workmen were hired to do repairs at the Spooner House in Plymouth, Massachusetts and upon arriving, knocked at the door. A little girl in colonial period costume opened it, which surprised no one as the more than 262 year-old house has been a museum for over 50 years. They got busy with their task, and soon along comes the curator, who curious, asks how they got in. The foreman shrugs and says the little girl let them in.

“What little girl,” the curator asked. The workmen led the curator to the room which the little girl had entered, only to find it, as well as the rest of the house, empty. The workmen, not used to encountering ghosts in broad daylight, packed it in and left.

By all accounts, the ghost of Abigail Townsend is a friendly little spirit, and shouldn’t frighten anyone. Abigail was a tiny thing when the Spooner family took her into the family home in the mid 18th century. The house itself, is one of the oldest houses on one of the oldest streets in America. Built about 1749 on North Street, just one street over from Leyden Street, where according to tradition the pilgrims built their settlement, five generations of Spooners called the two story house their home. Originally constructed for the widow Hannah Jackson, the first Spooner to take up residence was a successful business man and patriot of the American revolution, Deacon Ephraim Spooner. It stayed in the family until the death of James Spooner in 1954. It was James who willed the house and all its furnishings to be turned into a museum. Today it contains over 200 years of original furnishing, giving one a sense of how life has changed, or perhaps how little life has changed in Plymouth over the past two centuries.

And perhaps it’s haunted by James as well. Music has been heard coming from the house when it was quite empty, and James was well-known as a patron of the musical arts. But alas, it’s the creepy little kid ghosts that get all the publicity, and so the music is attributed to Abigail. Though when you think of it, that makes no sense at all, as it’s unlikely an eight year-old girl could have been very musical, and there were no stereos in the 18th century.

Abigail fell victim to a tooth infection, dying in an upstairs room of the Spooner House. There was no penicillin in those days, the infection spread and there was nothing to do about it, but try to comfort the little girl in what must have been an agonizing death.

Since then she’s been seen periodically, peering from the windows, rustling the bushes along the alley, even occasionally standing at the corner of the house. But more recently she’s seem to have become more active. Or perhaps the stories just get more publicity.

According to a local historian, a woman who used to live next door to the Spooner House awoke in the middle of the night to find Abigail standing at the foot of her bed.