The Shark Arm CaseIn 1935, a shark is caught then another,… 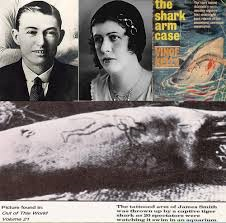 In 1935, a shark is caught then another, larger, tiger shark sees an opportunity and devours the first shark as it is being reeled in. The fisherman knew that a live tiger shark would be of interest to the public as at the time they were public enemy number 1 after a series of deaths were attributed to the species.

Eight days later on April 25, 1935, the shark was swimming about in the Coo gee Aquarium Baths (NSW, Australia) it began to act strangely, convulsed and then regurgitated the lower left arm of a man. The crowd was considerably appalled by the site but soon it got weirder.

Fingerprints were taken and police thought they would link the limb to some unfortunate swimmer. However the limb was identified as belonging to criminal (and police informant) James Smith who was reported as being missing since April 7, 1935. Also it was discovered the arm had in fact been severed with a knife before the shark had eaten it, not the tiger shark but rather the smaller shark the tiger shark had devoured!

The fact the arm had been sliced off led investigators to believe James Smith had been murdered.

Suspects for the murder were rounded up and one, Patrick Brady, went to trial. However he was acquitted after the prosecutor’s star witness was unable to give testimony as he was found in his car with three bullets in him!

What is more is that it was argued that finding an arm should not be tantamount to murder and that Smith could still be alive. The case remains unsolved and the rest of James Smith has never been found.

The Shark Arm CaseIn 1935, a shark is caught then another,…