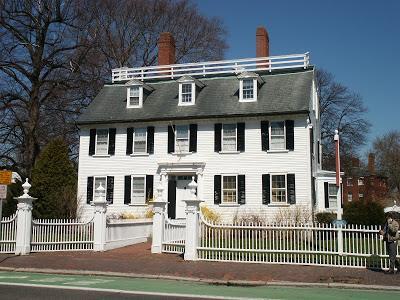 The Ropes Mansion, a stark white beauty, was built in 1727 in the Georgian style. The Georgian Style, named for the four King Georges of England, was based on classical Roman architecture that was sparked by the discoveries of Pompeii, Herculaneum, and Nero’s Dome. The house was renovated in 1894 in the Colonial Revival style, a nationalistic response to the centennial of the Revolution. The house was also moved back from the street. It is now listed on the National Register of Historic Places, and is owned and maintained by the Peabody Essex Museum. The house is closed to the public but the gardens are open year-round.

The Ropes Mansion once housed three generations of Salem’s Ropes family. The house was built for Samuel Barnard, a merchant. In 1768, Judge Nathaniel Ropes, Jr., purchased the house from Barnard’s nephew. The Ropes family then inhabited the house until 1907, when the house was given to the Trustees of the Ropes Memorial for public benefit.

The house is considered to be one of the most haunted in Salem. Nathaniel Ropes was an unpopular Loyalist judge and died of smallpox whilst his house was being stoned by a rabble outside in 1774.

The Ropes Mansion is supposedly haunted by Abigail Ropes. She died in the house when her nightgown caught on fire in the bedroom upstairs. She just walked too close to the fireplace – it wasn’t too uncommon for a woman’s clothes to catch on fire like this back then. Today some people claim to see her ghostly figure roaming throughout the mansion.