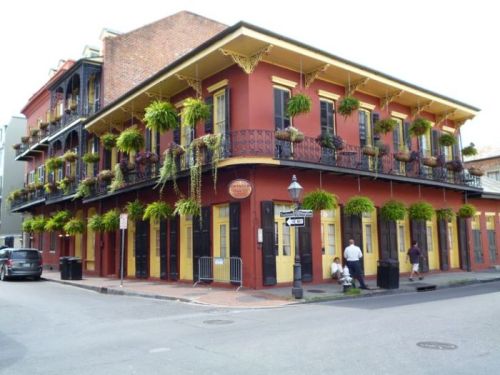 The Olivier House Hotel in New Orleans has a long history, beginning 1838, when widow Madame Marie Anne Bievenu Olivier had it built. Construction finished in 1839, when she moved into the house, located on Toulouse Street. Madame Olivier was born in 1772, and witnessed a lot of tragedy in the city of New Orleans, including the fires of 1788 and 1794.

When she was 16, she married Nicolas Godefroy Olivier, distinguished painter. The two would go on to have nine children and many grandchildren. New Orleans began rebuilding itself in the 1830s. Cotton was thriving, and the Olivier family was one of the wealthiest in the city. After her husband passed away, Madame Olivier decided to build a new house at the property she owned at Toulouse Street.

The home was built right in the French Quarter, about half a block off Bourbon Street. It was close enough to the action, yet far away enough for peace and quiet from the sights and sounds. In the original design, there was a business establishment on the first floor. The front of the home was designed with tall arches. At one point in time, there was a ballroom on the top floor.

After Marie Anne passed away in 1843, the property passed into the hands of Felix Labatut, and then onto Ms. Elizabeth Locoul. It survived being desecrated by Union soldiers during the Civil War. Ms. Locoul moved back in after the war and continued living in the house until she passed away in 1895. It has passed through many owners since. In the 1950s, an investment group from Texas bought the house with the intention of demolishing it in order to make room for a parking lot, but luckily, local residents managed to save it. In the 1970s, new owners got a hold of the house, and spent nearly a million dollars to restore it to its formal glory.

Today, the Olivier House is a hotel. It’s been renovated and fixed up with modern amenities. Each room has its very own theme and unique charm. Period antiques are a large part of the interior décor.

It’s also believed, by some, that former owners never left the Olivier House. Ms. Locoul in particular is still believed to live in the house. Perhaps she lived there so long in life that she didn’t want to leave it in death. Guests of the Olivier House have claimed to see Elizabeth over the years.