The I-35 Bridge and A MiracleThe I-35W Mississippi River Bridge,… 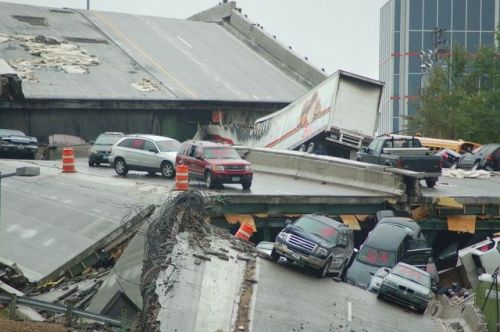 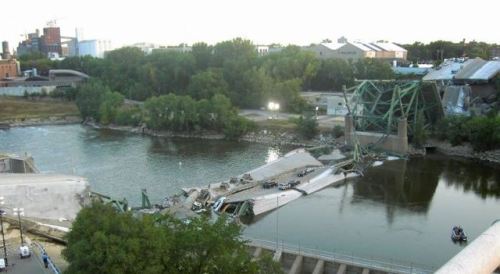 The I-35 Bridge and A Miracle

Ninety-three people were rescued from the bridge after the collapse including a school bus with 50 children on board. This bus miraculously rode the concrete on the way down without tipping. No one on board was injured.

At the time of the collapse construction was underway on I-35, this slowed traffic down which resulted in many cars being on the bridge at the same time.

This extra weight and a flaw in the bridge’s initial design are cited for being the cause of this catastrophe.

Mathew on Aug. 1st was headed toward the I-35 bridge to pick up a friend that lived on the other side. Because of the construction he was caught in bumper-to-bumper traffic.

Mathew had been going through some hard times recently and being a man of faith he took the slowed traffic as an opportunity to pray for help.

Within seconds of his prayer he saw a “vision.” In it he saw the bridge shaking and then it collapsed. Confused he spoke out loud, “What is this? You need to talk to me.”

Then he heard a loud “STOP!”

At this point he was 100 feet away from the bridge. The voice told him, “You need to stop right here.”

Mathew recalls he resisted for there was an endless line of cars behind him. But he gave in and stopped. Several people behind started to honk their horns repeatedly.

The voice reassured him that everything was okay, that he needed to remain where he was. Then he heard the voice say, “Look.”

Several cars behind him moved to go around him when they came within 20 feet of the bridge it snapped and then collapsed. Mathew saw 2 cars go off the edge.

In shock, he got out of his car and walked over to look down. Several people approached him and said, “Thank you.”

It took several days for Mathew to comprehend what had actually happened for he was traumatized by what he had seen.

He realized that if he had not listened to the voice he would have been on the bridge when it collapsed–not to mention many of the cars that were stopped behind him.

He now often gives a silent prayer of thanks.

The I-35 Bridge and A MiracleThe I-35W Mississippi River Bridge,…