The House that BledIn 1987 Minnie and William Winston had been… 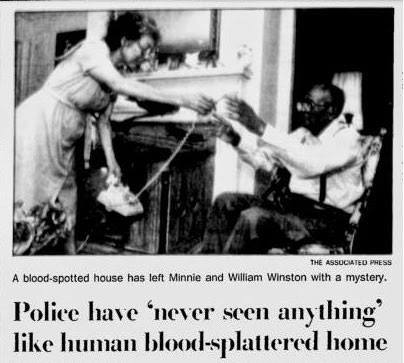 The House that Bled

In 1987 Minnie and William Winston had been married forty-four years. For the previous twenty-two years they had rented a six room, red brick home at the corner of Fountain Drive and Morris Street in southwest Atlanta. It was just before midnight on September 8 when Minnie, 77, stepped out of the shower and found the bathroom floor covered with splotches of blood. Mrs. Winston immediately woke her 79-year-old husband, saying, “Come look at all this red stuff coming out of the floor.”

Spots of blood, ranging in size from a dime to a silver dollar, were found on the floor and lower walls in the bathroom, bedroom, kitchen, basement, and every hall. The substance was also located under a television and in narrow, nearly inaccessible crawl spaces in the basement.

Homicide Detective Steve Cartwright agreed, said that in his ten years of service, “I’ve never seen anything like this.” The couple had no pets, and there were no rodents in the house. Police were not terribly concerned because William, retired from the National Screen Service Company, was often in bed attached to a dialysis machine, which cleanses the blood of people suffering from kidney failure.However, Mr. Winston seemed to reject his blood as the solution to the mystery, saying, “I don’t know what the stuff is.”

By September 11 it was known that the blood type of the house was O, and William and Minnie’s was A.

The House that BledIn 1987 Minnie and William Winston had been…