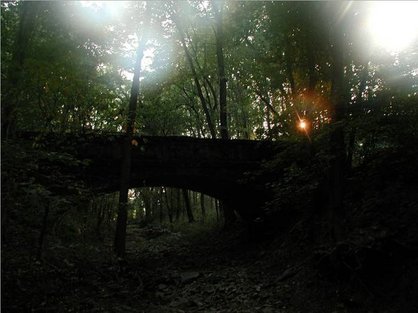 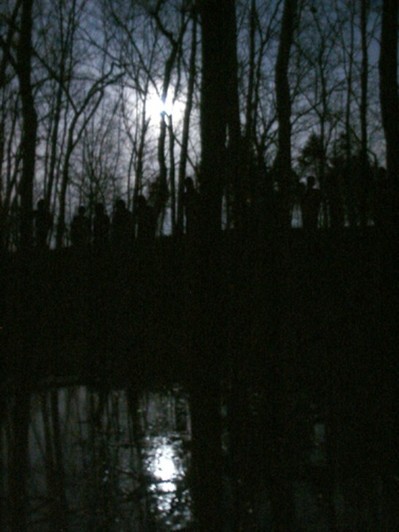 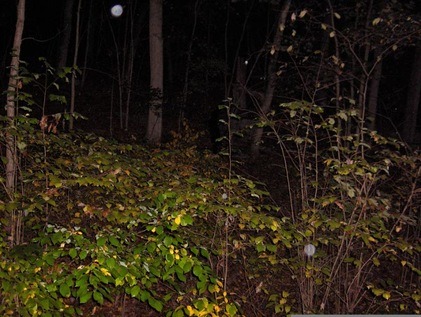 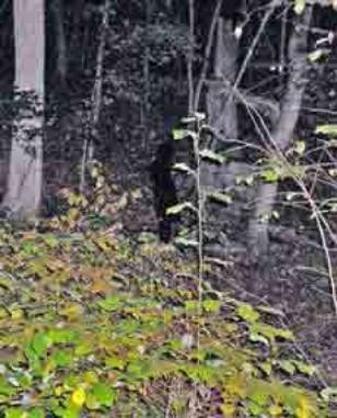 The History of Zombie Road

Zombie Road has quite a reputation as a place where shadowy figures and other non human entities have long been reported.

Gregory Myers of the Paranormal Task Force presents this piece on the history and deaths of one of the most haunted locations in the United States.

Within the urban sprawl of St. Louis lies a remote area called “Zombie Road”. Urban Legend tells a variety of eerie tales which include being host to ritualistic and occult practices which spawned inhuman and demonic entities while other tales tell of those who met their peculiar demise and still roam this desolate road in the afterlife.

“Zombie Road”, real name “Lawler Ford Road” is about 2 miles long through a valley of forest oak land hills and ends near the Meramec River in the Glencoe, MO area where it meets the newly established “Al Foster” trail.

The history of this area goes back to ancient Native American times where this was one of the few pathways cut by nature over the centuries through the bluffs to the Meramec River area just beyond them. It is believed that traveling ancient Native Americans used this pathway for foot travel and also quarried flint here for the making of various tools and weapons.

In the early 1800’s a Ferry (boat) was operated at the bottom area of this passage at times where a ford was located in the river for settlers and travelers to cross the Meramec River to the other side where the Lewis family owned much of the land. The origin of the road name is unknown to historians even today.

Ninian Hamilton a settler from Kentucky was the first settler to occupy and own land in this area in 1803. After his death in 1856, James E. Yeatman a prominent St. Louis citizen, a founder of the Mercantile Library and president of the Merchants Bank acquired the large parcel of land that Mr. Hamilton settled and owned.

The Pacific Railroad completed their railroad line from St. Louis to Pacific along the Meramec River in this area in the 1850’s. Della Hamilton the wife of Henry McCullough, who was Justice of the Peace for about thirty years and Judge of the County Court from 1849 to 1852, was struck and killed by a train in this area in 1876.

The first large scale gravel operations on the Meramec River began at what would become Yeatman junction in this area. Gravel was taken from the Meramec River and moved on rail cars into St. Louis. The first record of this operation is in the mid-1850’s. Later, steam dredges were used, to be supplanted by diesel or gasoline dredges in extracting gravel from the channel and from artificial lakes dug into the banks. This continued until the 1970’s.

From about 1900 until about 1945, Glencoe and this area was one of the resort communities of the Meramec River’s clubhouse era. Many of the homes were summer clubhouses, later converted to year round residences then lost to the great local floods of the 1990’s.

Some say this is called Zombie Road because the railroad workers who once worked here rise from their graves at times to roam about. Some insist that they have heard old time music, seen anomalous moving lights and other ghostly sightings from that forgotten era. Another tale tells of a patient nicknamed “Zombie” who escaped from a nearby mental facility never to be seen again. His blood soaked gown was later found lying upon the old road later named after him.

Other tales include one of an original settler who met their demise upon the railroad tracks. Another includes a pioneer who lost his wife in a poker game then went back to his homestead and took his own life. Many still report seeing these lonely spirits even today.

During the age of Prohibition a nearby town housed speak-easies and the summer homes of well known gangsters. Tales tell of individuals who were dealt a bad hand by such public enemies resulting in their permanent placement within the ground or bordering river to never be seen again.

The bordering river has tragically delivered many to the other side through the years. Children and adults alike have taken their last living breath within its dangerous waters before being found washed up on its shores. Even during this new millennium, several children met their demise one
day within its banks.

The railroad still shows “Death hath no mercy” as many have met their final fate upon its tracks. Local lifelong residents can still remember multitudes of tragic occurrences dating back to the 1950’s. One of these occurred in the 1970’s when two teens were struck by an oncoming train. Some of the local residents were used in search parties to find the body parts scattered about the area.

During the 1990’s a mother and her five year old child were crossing a bridge when an oncoming train met them. The mother’s last action was pushing her five year old child off the bridge. The engineer was able to stop the train and save the child. Although the mother died, this is still one of the happiest endings to a story this area will provide.

More recent past has seen this area become refuge for those wanting privacy to practice the occult and other rituals. Who can really know what true doorways to the darkness or unknown were opened here.

During the 1960’s a couple in their late teens were on top of the bluffs overlooking the road below.The male somehow lost footing and during the fall caught his face in a fork of a small tree growing out from the side of the bluff. His face and scalp remained while the rest of him fell to his death upon the road below. Others have also met their demise from the high bluffs above.

The area has also seen its share of suicides and murders. In the 1970’s a hunter stumbled across a car still running at the end the road. Closer inspection revealed a hose running from the exhaust pipe to the inside of the car with the driver slumped over the steering wheel.

One can agree that there is no lack of legends or tragedies surrounding this area which can explain the bizarre and eerie encounters of those who visit. I was one who became truly intrigued and attracted by such lore and was determined to either prove or disprove the Urban Legends surrounding it.

Within an hour several people observed a human sized shadow figure as it descended upon them from a small bluff nearby. It then ran onto the road, stopped, then disappeared into the darkness of the night. Throughout the night others heard unexplained voices, were touched by the unseen and witnessed the unexplained. This was one night that everyone could conclude that indeed some Urban Legends actually are real!