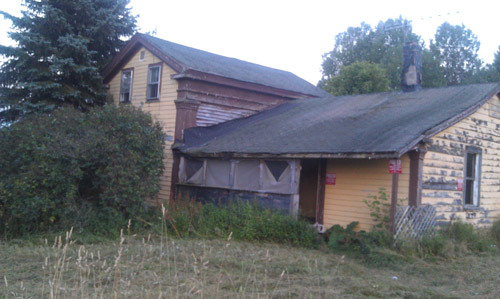 Tucked away in the Western region of New York is one of the most infamous haunted houses in the state. This home, known as the Hinsdale House, is the location of a violent series of hauntings, an exorcism, and the subject of countless paranormal investigations.

It all began in the 1970s when Mr. and Mrs. Dandy and their four children moved into the home. All they knew about the house was that it had been built 100 years ago, and that it had at one point been a roadside inn. Shortly after settling in, the family noticed a mysterious chanting sound during a hike in the area surrounding their home. The strange chanting would go on for about three weeks before it promptly disappeared. After this incident, more bizarre things began to happen. Family members would pick up the phone upon hearing it ring only to find no one on the other line, pounding noises were heard, lights went on and off by themselves, the kitchen stove would turn on and off while cooking dinner, windows would open by an invisible hand, and the faucets would turn on and off by themselves. Strange pounding noises were heard throughout the home, and on one time, after the children heard dragging noises in the attic, Mr. Dandy found that the chimney had been dismantled and that the bricks had been placed in the middle of the room.

Soon the hauntings began to escalate. Family and friends started witnessing objects moving by themselves. They also witnessed apparitions both inside and outside of the house. Most of the apparitions were woman in long gowns. Strange animal-like apparitions, of an unknown species, began to appear. On one particular instance the family saw several faces looking at them through the window. When they went outside to check it out, the same faces were looking back at them from inside the home while the lights flickered off and on.

As time went on the apparitions seemed to grown in strength. Instead of just being seen, they began to leave behind physical evidence. On top of what was already happening, indentations began to appear on chairs and beds when no one had sat in them, and one of the animal-like apparitions jumped into the daughters lap. Two of the family’s friends caught evidence of an apparition, while it was in the process of disappearing as it walked outside of the house, on film.

After being caught on film, the hauntings grew to an entire new level, one in which the family began to fear for their own lives. At one point, the family noticed that a letter opener was floating above one of the family photographs. The letter opener was directly pointing at one of the daughters in the picture, until it fell to the ground when family members tried to approach it. Another time a lamp was thrown across the room at one of the girls. Luckily the daughter was able to avoid the projectile, and the lamp smashed to pieces. The Dandy’s cleaned up the lamp shards and locked the door. Later on when they returned to the room, they found an Ace of Spades lying in the middle of the floor. Soon after, two of the children woke up with burn marks all over their bodies.

A few days later, the grandmother heard Randy’s (one of the sons), car in the driveway. She looked out the window only to find Randy and a blond hair woman sitting in Randy’s car before it drove away. This incident did not strike the grandmother as strange until later on that day, when she found out that Randy’s car had been in the garage all day in a non-drivable state. Several days after that incident, Randy was involved in a terrible car accident. Apparently his car had run out of control and hit a tree. While lying in a critical state in the hospital, Randy kept asking about the blonde woman. This mysterious woman was never found, although there was an indentation of a human head on the dashboard indicating the presence of a passenger. To further complicate the matter, a mechanic could not explain why the car had malfunctioned and Randy was left in a state of complete amnesia about the accident.

The event with Randy was the last straw. A priest by the name of Fr. Trabold was summoned to the home to perform an exorcism. During the exorcism the lights kept flickering until all of the prayers were said and a sense of calm came over the house. However, these effects lasted only a few weeks. Strange things began to happen again and the family moved out.

Once the Dandy’s moved out, a couple more families moved in only to move out within a short period of time. Eventually, the most recent owners, Flo and Joe Misniks, moved into the home. Flo said that she saw at least one ghost in the home: a man who had on blue jeans, a plaid shirt, and a hunting rifle. He was standing at the foot of her bed. She asked the man what he was doing there, to which the man responded that he didn’t know. Flo looked away for a second, and when she looked back the man was gone. The Misniks have also heard the sounds of a car in the driveway when no one was there, and the smell of cigar smoke would permeate through the house on occasion. However, the Misniks encounters were much less severe than the Dandy’s.

Throughout the Misnik’s time at the home, a book was published about the hauntings, a Discovery Channel show featured the home on one of its paranormal shows, and paranormal investigators would flock to the house to investigate. The home is still known as one of the most haunted homes in America, and is touted by some as the “Next Amityville Horror.”