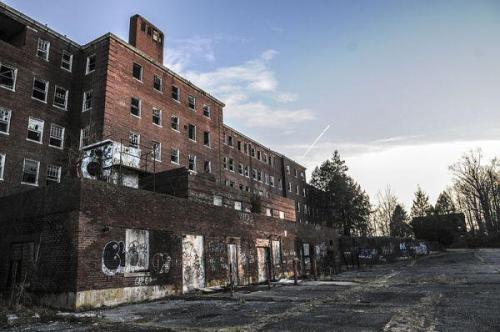 The Glenn Dale Hospital in Maryland

The Glenn Dale Hospital is a sprawling abandoned complex that sits on 216 acres of Maryland’s Prince Georges County. It was originally built as a tuberculosis hospital with two main buildings, one for adults and one for children, plus many smaller outlying facilities. After tuberculosis epidemics were largely curbed, the complex remained in operation as a general hospital. Glenn Dale opened its doors in 1934 and remained in operation for roughly fifty years, finally closing down for good in 1982 due to questions of structural integrity and the presence of large amounts of asbestos. Today the hospital’s many buildings sit crumbling and decaying, full of furniture and equipment left over from the facility’s years of operation. Among the still standing buildings are the original children’s hospital, the massive main adult hospital, as well as laundry buildings, guard buildings, and nurses’ quarters. Many of the buildings are connected by underground tunnels that were used to transport patients and materials over the vast complex without having to go outside, especially during the cold winter months.

The buildings have been vandalized heavily in the two decades they have been abandoned. Many of these vandals are thrill-seekers who have explored Glenn Dale after hearing the dozens of legends surrounding the buildings.

One of the most enduring rumors about Glenn Dale is that during its later years it was used as a hospital to house the criminally insane. Stories are told that upon the hospital’s closing, some of these deranged lunatics were simply released onto the streets. With no family to speak of and no idea of where to go, they found their way back inside the abandoned buildings and now call them home. In the darkest recesses of these ramshackle structures reside some truly insane individuals, or so the stories say.

Another tale claims that the hospital had to be abandoned due to an overwhelming epidemic of tuberculosis that killed most of the patients and staff of the hospital and infected the very building itself. Explorers should be careful, the story says, as touching any of the remnants of the building’s past could expose them to this deadly disease. While this is untrue, it is once again worth mentioning that the buildings are in fact overrun with asbestos and do pose a threat to the health of adventurous visitors.

Many late night explorers to Glenn Dale report hearing strange noises and even seeing ghosts. Many say that the spirits of those patients who died while residents of the hospital remain today, haunting the halls of the now abandoned buildings. Not surprisingly, many people report experiencing odd occurrences in the vicinity of the morgue, located in the bowels of the main adult hospital building.

Glenn Dale hospital is a no trespassing area regularly patrolled by Prince Georges County police as well as park police that live in a facility on the grounds.