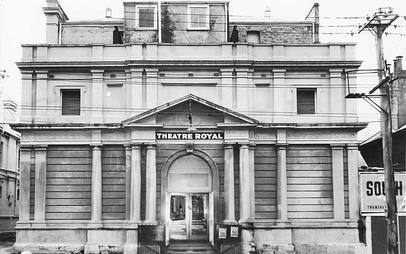 The Ghost that Saved the Theatre Royal

June, 1984, the Theatre Royal was nearly destroyed when a fire burned up much of the stage and auditorium. The damage would have been a lot worse had the fire curtain not been mysteriously deployed.

Was the Theatre Royal resident ghost ‘Fred’ the savior of the building that night?

In 1984 Australia nearly lost it’s oldest ‘still in use’ theatre when the Theatre Royal in Hobart caught flame. Much of the stage and front of the auditorium were damaged in the blaze but it could have been much worse.

Legend says that the fire curtain located at the edge of the stage let itself down smothering much of the fire. Had this not happened it is said the fire would have left the theatre completely gutted and Australia one less historic icon.

At the time of the fire the Theatre Royal was 147 years old. It opened in 1837 and had been designed by Peter Degraves, the founder of Australias oldest brewery: ‘Cascade’.

The Theatre Royal was Australia’s second purpose built theatre and it offered a large variety of different forms of entertainment. Stage shows, live music and even cockfights were part of the itinerary.

The theatre was openly criticized for it’s location in Wapping an area full of brothels, public houses, workers cottages and factories.

Beneath the auditorium a tavern operated to cater for those seated in ‘the pit’, the low cost ticket holders. It was not solely for their patronage however as actors and the more adventurous type could also be seen having a drink or three in this seedy area of the theatre. Above the doorway to the tavern was a sign naming it ‘The Shakespeare’ however it quickly became known as ‘The Shades’.

Their ease of access to the auditorium from ‘The Shades’ also meant that shows were regularly interrupted by the raucous cries of the drunkards and prostitutes ‘selling their wares’.

The Shades closed within the year. It would be understandable if you thought they were closed due to the unending dramas unfolding off the stage but it was really a financial decision; the tavern was starting to pull more customers in than the theatre was!

During the years since it’s opening the Theatre Royal underwent many renovations and transformations. The facade went from looking ‘like a two story house’ to the more grand entrance that can be seen today.

The number of seats has both risen and fallen as the theatre underwent these changes. The theatre has also been under threat of demolition on several occasions but was always saved by groups or individuals who understand and respect the need to save the building.

There are several possibilities of who Fred could be. Some believe he is the spirit of an actor that died during a performance in the late 1800’s.

Others believe he may be the spirit of a sailor killed by a prostitute in ‘The Shades’. The final theory is that an argument started between two actors resulting in the death of one during a duel at dawn.

It would seem the theatre has had as much drama behind the scenes ats it did on stage!

Fred has been seen on several occasions startling the workers late at night by walking down the aisle and taking a seat before disappearing. He is also said to have been seen in the basement, the previous location of the old tavern.

Regardless of who he is there seems to be no malicious intent within this ghost. I think he is just happy to still have a place he can call home.