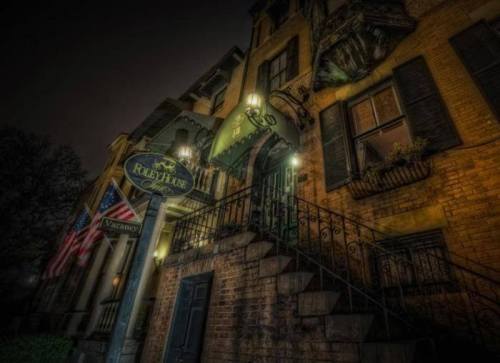 The Foley House Inn is located in Savannah, Georgia and boasts one of the most romantic getaways the state has to offer. Rooms are equipped with jacuzzis, fireplaces, private balconies, courtyards, gardens, and breakfast brought to your room. But, such a beautiful place also has a haunted story that will send shivers down your spine.

“During construction in 1987 workers tore down a wall and discovered a skeleton inside of it. It is believed that the body was of a poor gentleman who was the victim of a murder. This man, named Wally, had his body hidden in this wall in the late 1800’s.

The story that has been shared around was that this gentleman was trying to court the owner of the the house, Honoria Foley. He had secured a room in the Inn and would often try to make moves on Honoria. One night he decides to sneak into her room while she was asleep. Startled, Ms. Foley grabbed the nearest thing to her, a candle holder, and swung it with all of her might. The heavy candle holder struck Wally in the head, killing him instantly.

The story goes on to say that she was friends with a different man who happened to be a mason and a carpenter. He allegedly helped Ms. Foley hide the man’s body in the wall of the Inn.”

Wally’s ghost is said to still walk the grounds of the Foley House Inn. With such an abrupt death his soul may never be at rest. In life he spent much of his time tormenting himself trying to woo Honoria. He would essentially take that energy to the grave with him.