THE ENFIELD POLTERGEISTPeggy Hodgson, a single mother of four,… 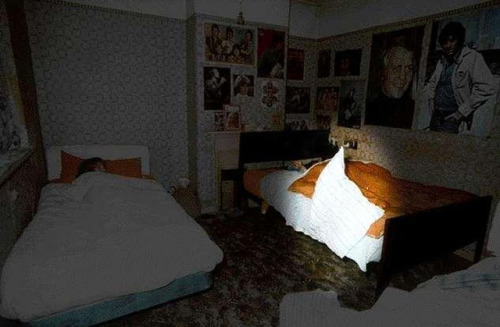 Peggy Hodgson, a single mother of four, was terrorized by the now famous ‘Enfield Poltergeist’ in her home during 1977. It began with her children complaining that their beds were moving, but Peggy thought this was only their childish imaginations at work. This changed in the following days, as she began to see chests move across the room and drawers open and close before her eyes. Marbles and toys would fly around the room and would be too hot to pick up. She got her kids out of the house and had a neighbor check the premises. There was no one there. Peggy called the police when she heard knocking on the walls, and the officer who arrived heard them too. She even wrote about them in his report after witnessing a kitchen chair move across the room.

There were multiple witnesses to these events apart from the police officer. Maurice Grosse from the Society for Psychical Research claims to have seen marbles flying at him, doors opening and closing and strange temperature changes. Perhaps most interesting of all, Grosse also claims to have spoken directly with the poltergeist who spoke through Peggy’s daughter Janet. While possessed, Janet referred to herself as Bill who said he had died of a brain hemorrhage in the house some years before. As suddenly as the haunting began, the events stopped happening in 1978 and nothing supernatural has occurred at the house since.

THE ENFIELD POLTERGEISTPeggy Hodgson, a single mother of four,…