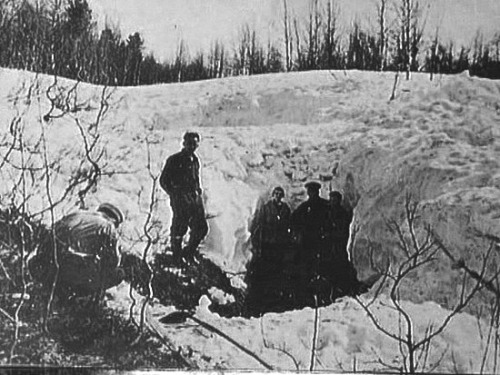 On February 2, 1959, nine ski hikers died under very mysterious circumstances. This was in Soviet Russia, mountain hikes you.

Here is a breakdown of the condition that the bodies were found in:

The first bodies were found frozen solid near a river, nearly a mile from camp. Next to a river were the remnants of a long burnt out fire. About 350 yards away the body of Igor Dyatlov was found. Nearby, the remains of Rustem Slobodin and Zina Kolmogorova were found 200 yards apart, in a way that seemed like they had been trying to crawl back up to the camp site.

Two months later the rest of the bodies were found under 15 feet of snow in a small den that they had hollowed out themselves. They had broken bones and terrible internal injuries, but no external wounds, not even scratches. Pieces of their clothing had high levels of radiation. Some of them were fully clothed, and others were almost nude. The most gruesome discovery was that of Lyudmilla Dubinina, who was missing her tongue and both of her eyes.

None of their injuries appeared to be fatal. Rustem even had a small crack in his skull, but it would not have caused his death. A boy who helped find the bodies claimed that they all had a deep brown tan. Also strange, their tent had been ripped open from within.

The Soviets say it was just a, compelling natural force, because, Russia.

We will probably never know what happened that night. Experts have tried effortlessly to solve this mystery, but all have failed, only coming up with more dead end theories.