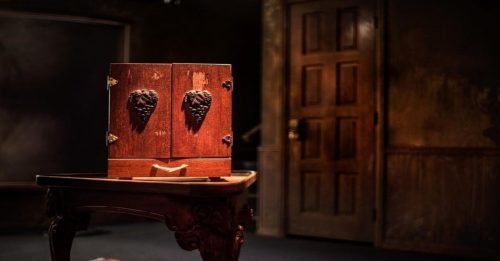 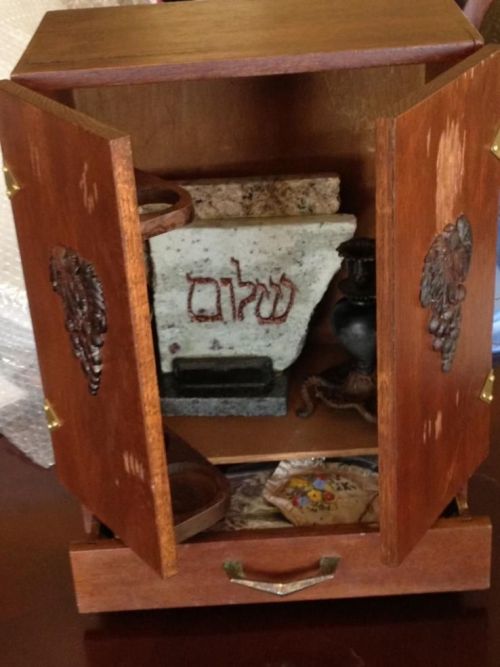 A Dibbuk Box is a wine cabinet which, according to Jewish folklore is said to be haunted by a restless, evil spirit that is capable of haunting and possessing the living. One particular Dibbuk Box became famous when it was listed on eBay along with a terrifying back story.

The story began in September of 2001, when an antique buyer and refinishes attended an estate sale in Portland, Oregon. The auction was held to sell off the belongings of a 103-year-old woman and her granddaughter informed the antique dealer of the woman’s past when she noticed that he had purchased a simple wooden wine cabinet. The old woman had been Jewish, the only one of her family members to have survived her time in a Nazi concentration camp during World War II. When she immigrated to the United States, the wine cabinet and two other items were the only things she brought with her.

The woman’s granddaughter explained that her grandmother had always kept the box hidden away and said that it should never, ever be opened because it contained a malicious spirit called a dibbuk. She requested that the box be buried with her but since doing so went against Jewish tradition, her family did not oblige. When the antique dealer asked the granddaughter if she would like to keep the box for sentimental reasons, the woman vehemently refused, becoming very upset and saying, “We made a deal! You have to take it!”

The dealer took his purchase back to his shop and placed it in his workshop in the basement. Immediately, strange and frightening things started happening. He was called by his frantic shop assistant, who said that the lights had gone out, the doors and security gates had locked and she heard terrible sounds coming from the basement. When he investigated, he discovered a terrible odor of cat urine lingering in the air and every light bulb in the place had been smashed.

The dealer gave the wine box to his mother as a gift and the woman immediately suffered a major stroke. In the hospital, she spelled out, H-A-T-E G-I-F-T as tears spilled from her eyes uncontrollably. He attempted to give the gift to several more people but it was always returned to him within a few days, usually because people just didn’t like it or because they felt that something about it was evil. He began suffering from a recurring nightmare and he later found that all of his family members who had been around the box were having the same dream. He started seeing shadow figures darting around in his peripheral vision, as well.

After finally admitting that there was something paranormal happening, he went online to research and fell asleep at his computer. When he woke up, he felt like something was breathing on his neck and when he turned his head he saw a huge shadow figure dashing away from him down the hall. He then decided to list the item on eBay, along with a detailed account of what had happened to him since obtaining the box.

Jason Haxton, the curator of a medical museum in Missouri, purchased the box from the eBay auction. He later wrote a book detailing the strange story of the Dibbuk Box and in 2012, a horror movie based on the book entitled The Possession was released.