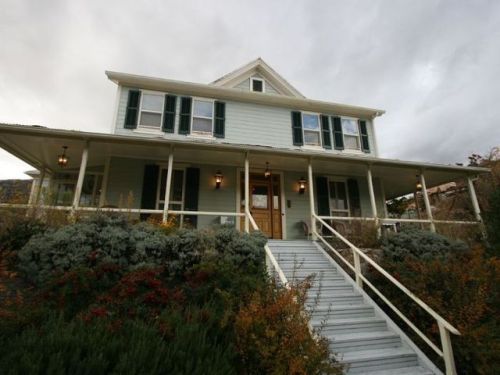 The Clawson House Inn in Bisbee, Arizona was originally built in 1895 by an old mine manager by the name of Mr. Clawson. Once a residential home, it is now a bed and breakfast, and is still in operation today. However, the Clawson House Inn is not just dwelling to visitors and tourists, but four known ghosts.

Located at 116 Clawson Avenue in Bisbee, Arizona, 85603 – southeast of Tucson – the Clawson House Inn was the final resting place of three local miners who lived in the mansion in the late 1890’s. Having a sizeable residential abode, Mr. Clawson essentially turned the place into a boarding house for his mining employees and was already renting out space in the home before it ever became an official bed and breakfast.

The three miners met their untimely demise within walls of the Clawson House Inn. According to local legend, there were labor disputes going on at the Queen Mine southwest of town. A multitude of workers went on strike, creating many open positions within the mines. Authorities rounded up the disgruntled strikers and ran them out-of-town as unemployed men seeking jobs quickly jumped on the opportunity to work within the mines.

These three men were among those new workers, and took up residence at the Clawson House Inn. As the story goes, the miners who were on strike returned one night, murdering the three new miners living at the boarding house. All three are said to haunt the Clawson House Inn to this day, and are not reputed to be the nicest of ghosts.

Also residing in the Clawson House Inn is the ghost of Mrs. Clawson herself, the wife of the original owner. Her ghost is said to be much more gentile than that of her fellow ex-miner ghosts.

Claims of an elderly woman – little more than a spectral apparition – have been reported on many occasions by visitors of the hotel and employees alike. Mrs. Clawson’s ghost has never really caused fright in anyone who has seen her, leaving them with more of a peaceful, docile atmosphere.

It is the paranormal activity of the miners said to cause discomfort to the guests and employees of the Clawson House Inn. Their presence evokes fear in those who encounter them, whether it be as vague as an eerie, spine-tingling cold spot or as deliberate as a loud crashing sound outside, or inside, a guests room.

Inexplicable noises have been reported, everything from footsteps and clanging sounds to knocking and unintelligible whispers in the guests ear, as if someone were right up on them. When they turn around, no one is there.