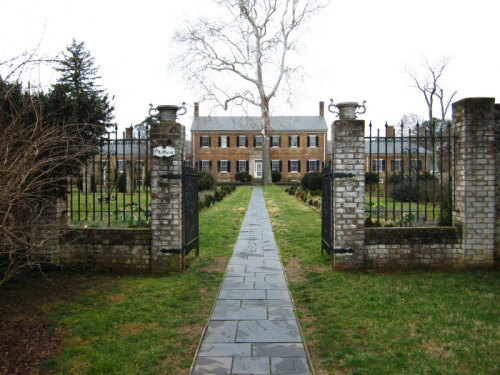 The Chatham Manor’s Lady in White

The Chatham Manor was a thriving plantation overlooking the Rappahannock River in Fredericksburg, Virginia. Construction was started in 1768 by William Fitzhugh and upon its completion the 1,280 acre estate included a dairy, ice house, barns, stables, a fish hatchery, an orchard, mill and a race track which Fitzhugh would pit his horses against other planters horses in the surrounding area. The house was named after the Earl of Chatham, William Pitt, a good friend of William’s.

The Chatham Manor was well known for its elaborate parties and despite the success of the plantation, the parties and entertaining put a financial strain on Fitzhugh and in 1796, he left Chatham and in 1806 he sold it to Major Churchill Jones for $20,000. It stayed in the Jones family for the next 66 years. Over the years Chatham had 15 different owners and the last one, John Lee Pratt left the plantation to the National Park Service which took possession of the plantation in 1975.

Chatham had many famed visitors over the years and it is somewhat interesting how they intertwine through history. One of the visitors was George Washington who lived only a few hundred yards away. Washington and Fitzhugh were friends and Molly Fitzhugh, William’s daughter, married George Washington Parke Custis (Washington’s step grandson). Their daughter, Mary, married Robert E. Lee. There are many tales the Lee courted Mary at Chatham but the Park Service said that there is no evidence to support that claim.

There are probably several reasons why the Chatham house could be haunted. In 1805 a group of slaves rebelled at the plantation. During the rebellion the overseer and 4 other people were overpowered and whipped. It took an armed posse to put down the rebellion and punished those involved, in total one man was executed, two died while escaping and two were deported.

During the Civil War and the battle of Fredericksburg, the Union army used Chatham as their headquarters and after the fighting started and the Union was defeated, Chatham was used as a hospital for the many wounded Union soldiers. 130 soldiers died at Chatham and were buried on the grounds. It wasn’t until after the war that the bodies were dug up and re-buried at the Fredericksburg National Cemetery.

Interestingly though, these are not the reason that Chatham is considered haunted. The reason is forbidden love. An English girl had fallen in love with and English dry-salter and her father refused to let her daughter marry a commoner. He sent her to Chatham in hopes of marrying her to someone he thought was up to their social standards.

Her true loved followed her to America and after meeting secretly decided to elope. They planned on using one of the many social events at Chatham to mask her departure and she would use a rope ladder to climb down to the river and they would boat away. Unfortunately, their plan was overheard by a servant of George Washington who was attending the event.

She told Washington of the plan and when the young girl climbed down the rope, she fell into the arms of George Washington who had the English suitor arrested and the young girl shipped back to England. No one knows what happen to the young man but the girl married in England and had 10 kids but is rumored to have never smiled again after that evening.

She vowed on her death bed to return to the only place she was truly happy and that ended up being Chatham Manor. The apparition of the young lady, called the Lady in White, is seen once every 7 years on the anniversary of her death, she walks the path that leads to the river assuming to search for her true love. Today it is known as the ghost walk and she began appearing there from the day of her death in June 21st, 1790.