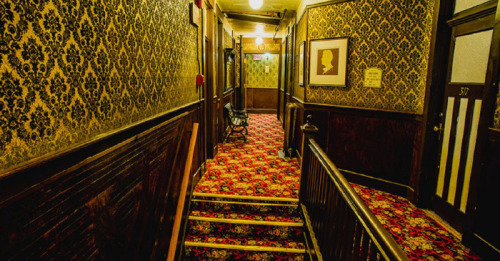 Terror in Rm 315 at the Alaskan Hotel

There have been many mysterious and spooky stories written about the Alaskan Hotel in Juneau, Alaska. And for good reason. It’s one of the hottest haunted places in Alaska. But more than you can even imagine!

The Alaska Hotel is the oldest operating hotel in Southeast Alaska , opening on Tuesday, September 16, 1913, built by Charles Hooker, Jules B. Caro, and the McCloskey brothers, John and James “Big Jim” McCloskey.

Upon its grand opening, the Dispatch Newspaper wrote that, “At 6 p.m. the management will formally unlock the doors and the keys with then be attached to a toy balloon which will carry them out of sight. From the moment the doors swing open, never to close, the hotel will be for the accommodation of guests.” And so with this, it is believed, spirits of those who stayed here never left.

Bettye Adams, the owner of the hotel for more than forty years has a clear understanding of what transpired here. With this, it has caused many to believe that there are lingering spirits that haunt her building.

Alice is one of the more frequent spirits that lingers within hotel. The local legend states that Alice first came to the Hotel during the gold rush with her husband, both with the dream of striking it rich.

Promising that he would be back in less than a month, Alice’s husband left the hotel, but when he failed to return even after many weeks, Alice had to find an alternate means of supporting herself. She became desperate for she had used the little money her husband had left her, and for this reason Alice turned to selling her services for a means to survive.

It all came to a tragic twist of fate as her husband returned a short while later. When Alice’s husband saw her with another man in that South-facing room, he was enraged. The legend describes a macabre scene of a furious husband firing several rounds from a revolver into a man, saving the last one for his wife. “Alice” is seen to this day in a diaphanous gown with her arms outstretched, just as she died on the bed in room 219.

Today, the staff and guests have reported interactions with Alice’s ghost on many occasions. Close to where she met her gruesome demise, she lingers  in the back of the hotel, especially in Rooms 218, 318 and 219. Many guests desire to be moved to a different room, or simply leave the hotel entirely, due to an undesirable run-in with one of the Alaskan Hotel’s invisible “guests.”

Various staff members have stated that they are always uncomfortable when they are in this area of the hotel. Housekeepers recount how they often discover towels or other items either moved or misplaced in these two rooms. Several have seen Alice’s ghost sitting on one of the beds.

Alice is only one of many spirits that make themselves known throughout the hotel, but one in particular has caused the biggest stir.

The epicenter of the haunted activity there is in room 315. Ms. Adams refers to the room as “creepy”, saying that although she herself has never seen anything, she gets strong, uneasy sensations when she enters the space. According to a couple of people that were there on May 19th, 2007, a tragic event occurred that has left an indelible mark on this property. The events are described in interviews, and they paint a gruesome picture.

The resulting reports written about room 315 describe a scene where a sailor who was in town asked to reserve the haunted room on the third floor, so he was checked into room 315. That night, there was commotion in the room, and when police responded, they discovered blood splattered all about the walls and a broken window. It turns out that this sailor jumped right through his window, and fell to the ground in the alley below. A witness in the room below his on the second floor had her window broken as his body bounced between the hotel and the adjacent building on his way down. The sailor beat the odds and survived, and was given care after managing to make it to the street from the alley. To this day, there is no explanation for his jump or the bloody mess left in the room.