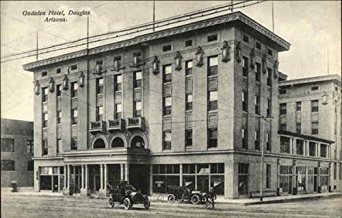 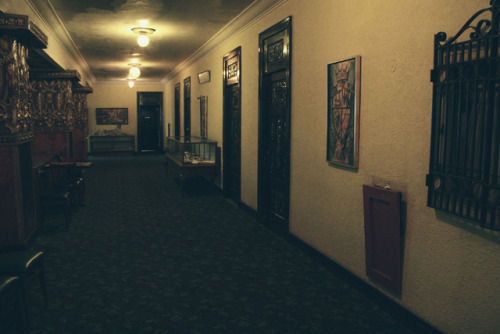 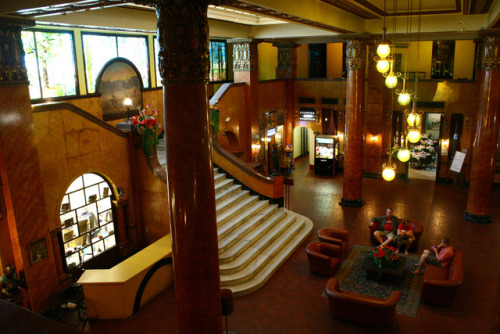 (Top photo is a vintage postcard; following two are my own)

The Gadsden Hotel in Douglas, Arizona celebrates its 110th anniversary this year. In that time it has become host to a variety of ghosts and other strange events that have terrified both guests and staff members.

Room 333 is rumored to be the most haunted of all the rooms. Knocking noises often arise from the radiator; lights flicker; the door opens and closes with the mysterious clicking of an unseen key; a spoon tinkles in a cup of tea that isn’t there. Guests report feeling the ghostly touch of a spirit’s hands, and some even are awoken in the night by the sensation of a person sitting on their bed or getting into bed with them.

The basement has its own ghosts, one of which is a headless phantom who wears khaki pants and grabs staff members by the arm or the leg. Despite his lack of a face, he often whistles to make his presence known. The other ghost is a cowboy wearing a long duster coat and a ten-gallon hat; he is seen lurking in the shadows of the maze-like basement, in which one can become easily lost.

The grand marble staircase in the lobby bears one step–seventh from the bottom–with an enormous chip in it. This is rumored to have been made by the hoof of Mexican revolutionary general Pancho Villa’s horse as he charged up the staircase.

In fact, the headless ghost in the basement may even be Pancho Villa himself. Legend says he buried a substantial cache of treasure somewhere in the remote Sierra Madre mountains of northern Mexico. The map to the burial site was tattooed onto Villa’s head. When he died, his loyal men cut off his head to steal the map, and buried the rest of his body under the ashes of the Gadsden Hotel, which had recently burnt down. In 1929, the hotel was re-built upon the beheaded corpse, and perhaps today it still wanders that place, searching for the men who desecrated his body and stole his glorious treasure.