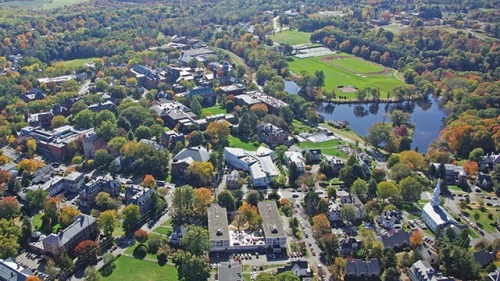 Established in 1871, Smith #College is a private women’s liberal arts college located in Northampton, #Massachusetts, with some buildings on campus dating back to the early 1700’s. In addition to being renowned as the largest women’s college in the #UnitedStates, it is also rumored to be one of the most #haunted. Chase House, which was constructed during the early 1800’s as a women’s boarding house, is said to be haunted by the #spirit of a #woman who committed #suicide after killing her newborn child. #Studentsresiding at Chase House report encountering the woman’s spirit at night, carrying her murdered child and weeping, as well as hearing the sounds of disembodied footsteps and the sounds of a crying infant. The nearby Clark House is rumored to be haunted by the spirit of a former student who was #murdered by a jealous lover, and students staying on the 4th floor of Baldwin House often report hearing strange banging noises and footsteps coming from the attic at night, which remains off limits and locked at all times. Students in both locations report witnessing lights turning on and off by themselves, and doors being slammed shut by an unseen entity. On November 13, 1925 a student named Jeanne Robeson was found dead in Park House after inhaling fumes from a gas stove that was left running overnight. Her #apparition is said to haunt the location of her death, where students report feeling sudden cold spots, as well as feeling the presence of an unseen entity. Northrop House is also said to be haunted by the spirit of a woman named Francine, who fell in love with a foreign man while studying abroad in #Italy. When Francine returned to Smith College to complete her senior year of college, she continued to exchange letters with the man. They made plans to #elope, but suddenly Francine stopped receiving the letters. She disappeared mysteriously before graduating and was reported missing by family members shortly after. She is believed to have committed suicide, however her body was never found. Now it’s believed her heartbroken spirit now haunts Northrop House, the last location where she was seen alive. Another popular #folklore tale passed down by students at Sessions House tells the story of a woman named Lucy Hunt, who fell in love with a #Britishsoldier during the #American Revolutionary War. According to legend, a British soldier known as General John “Gentleman Johnnie” Burgoyne was captured by Colonial militia forces led by Lucy’s father and held prisoner in the house. Over time Lucy began to develop feelings for the captured #soldier, and would often sneak away at night to be with him. Eventually General Burgoyne was sent back to #England, and was unable to return to his young lover for unknown reasons; in one version of the story, Lucy dies tragically while General Burgoyne continues to fight in the British #Army, and in another version General Burgoyne simply decides to start a new life in England and never returns. Regardless, their spirits are said to reunite in #death at the Sessions House, where students report witnessing the two lovesick #specters embracing passionately before disappearing mysteriously into the night. Additionally, students at Talbot house report witnessing the spirit of a woman wearing a white gown, known as the Lady In White, as well as the spirit of a young boy who was locked in the building’s attic and left to die, and Wilder House is rumored to be haunted by the spirit of a student named Gloria who committed suicide.

If you liked this post, please consider following GhostQuest on #Patreon, and be entered into our monthly prize #giveaway!! Or to read more, click the link here: http://www.ghostquest.net/haunted-massachusetts.html