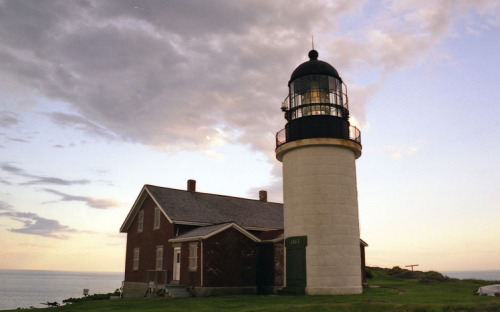 Seguin Island in Maine is a haunted lighthouse that is home to one of the more gruesome tales of haunting in the United States.

Although Seguin Island is close to the mainland, it became inaccessible and isolated during the winter months. In the 1800’s, a man got the job as lighthouse keeper and to avoid being lonely, brought his young wife out with him to tend the light.

The man’s wife found the isolation very depressing. When she complained about the boredom and loneliness, the man decided to buy her a piano to keep her occupied.

The wife was delighted but she only knew how to play one song. She played it over and over, driving her husband insane. Finally, he couldn’t take hearing the same tune again and again. In a fit of rage, its said he picked up an axe, ran into the lighthouse and chopped the piano to bits. His anger wasn’t spent. When his wife began shouting at him, he turned around and chopped her to bits too.

Legend says, When the lighthouse keeper realized what he had done, he was beside himself with grief. He went completely out of his mind, grabbed the axe and chopped at himself as well.

When spring came around and people from the mainland went to visit the lighthouse, they came across a horrible scene. The interior was strewn with chopped up pieces of the wife and the piano and the mutilated body of the husband with the axe still clutched in his hand.

They say that, on a quiet night, you can still hear the ghostly sounds of piano playing floating across the water. The ghost of the lighthouse keeper has also been seen, still tending to his duties, climbing the staircase of the tower as if heading upstairs to tend to the light.

One night in 1985, the coast guard was decommissioning the lighthouse and the old furnishings were due to be removed from the premises. Apparently the man in charge of the crew was awakened in the middle of the night by a ghostly figure who was shaking his bed.

The ghost was said to have asked him not to take the furniture and to leave his home alone. The man didn’t grant the request and the next day he loaded the furniture onto a boat. As it was being lowered into the water, the cable mysteriously snapped. The boat and all the furniture in it plunged onto the rocks below and were smashed into pieces.

Apparently a young girl also died on the island and is buried not far from the lighthouse grounds. Subsequent lighthouse keepers have reported seeing the ghost of the girl running up and down the stairs, laughing and waving at them. People visiting the lighthouse claim to have heard ghostly sounds, odd shapes moving in the darkness, furniture being moved, jackets falling off of hooks and items going missing.

Due to its rich history and tragic stories, it is no wonder the Seguin Island lighthouse is haunted.