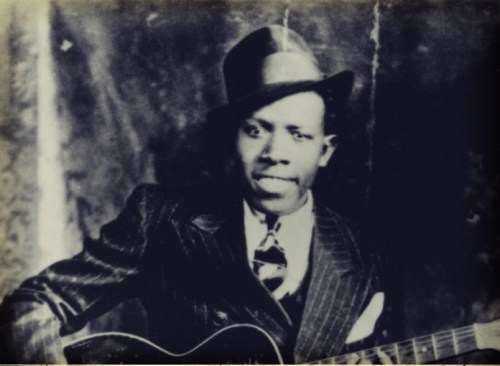 Robert Johnson was an American blues singer-songwriter and musician. It was his guitar-playing ability for which he is most remembered, and is still considered to be among the greatest guitarists of all-time.

Strangely, playing the guitar was not a skill which he was ever known for as a child. The story goes that, although he played it avidly in high school, he was not reported as having any real talent for it. However, at the age of 18, Johnson displayed a mastery of guitar that seemed to come from nowhere. His rapid knowledge of the instrument was inexplicable: he played it with such intimate finesse that the only explanation for it was devilry.

According to legend, as a young man living on a plantation in rural Mississippi, Johnson greatly desired to become a great blues musician. This desire was so great, he took his guitar to a nearby crossroads. There he was met by the devil, who took his guitar and returned it. Upon handing it back, Johnson was given mastery of the instrument – for the small price of his soul.

In the years that followed, Johnson became an itinerant musician, moving from place to place playing his guitar for tips on street corners. He later went on to record several songs.

Some say that allusions to Johnson’s diabolical pact can be found in several of his own songs, including Cross Road Blues, and Me and the Devil.

Somewhat ominously, Johnson died under mysterious circumstances in 1938 at the young age of 27. One theory suggests that he was poisoned by the jealous husband of a woman he had flirted with. Another theorizes that he died of syphilis. Ultimately, no one knows. Not only that, Johnson’s grave site is a mystery – with at least three different locations having been marked out as possible sites.

With Johnson’s music now enshrined in the Blues’ hall of fame, one can only wonder if the devil came and collected his fee as agreed. After all, Johnson died at the legendary, and possibly cursed, age of 27, meaning that he joins other great musicians in the infamous 27 club, including Jimi Hendrix, Kurt Cobain and Jim Morrison.