Rings on her FingersFlorence Wynsham took ill and fell into a… 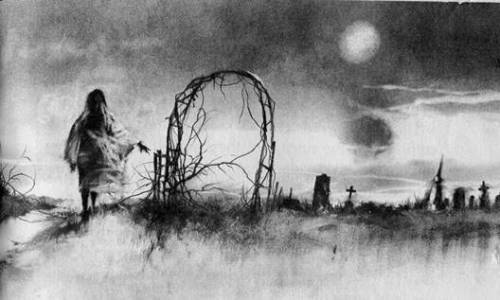 Rings on her Fingers

Florence Wynsham took ill and fell into a coma. The doctors could do nothing for her and to the grief of her husband she died. He had her buried in a small cemetery at the edge of town—making sure she wore her golden promise and wedding rings

In the middle of the following night a gravedigger entered this cemetery with the express purpose to steal her jewelry. He carried a lantern and shovel with him.

The dirt around her grave was fresh and soft so it did not take him long to hit the top of her wooden coffin with his shovel. He quickly pried the lid off.

In the moonlight he spotted the sparkling golden rings. He tried to remove them but they were stuck. He decided the only way to retrieve the rings was to cut fingers off the corpse.

He took out his pocketknife and sliced the first finger with it. To his horror the finger started to bleed. He heard a rustling sound and the corpse began to stir.

Suddenly, she sat straight up in the coffin. Terrified, the grave robber dropped his lantern. Now only darkness surrounded him. He felt ten cold fingers encircle his neck.

He screamed and scrambled out of the grave. He blindly ran not caring about the direction as long as it took him away from the coffin.

As he quickened his steps he dared not look back. In the pitch darkness he did not realize he was headed for a steep cliff. He stumbled and fell over this cliff.

He hit the rocks below. The knife he still held pierced his heart as he hit the bottom and he died.

Rings on her FingersFlorence Wynsham took ill and fell into a…