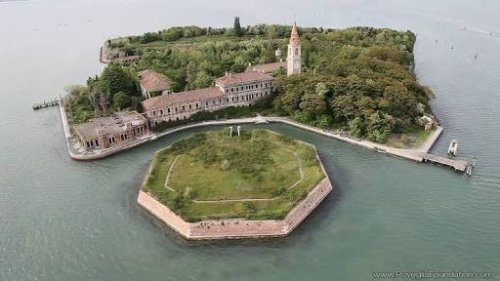 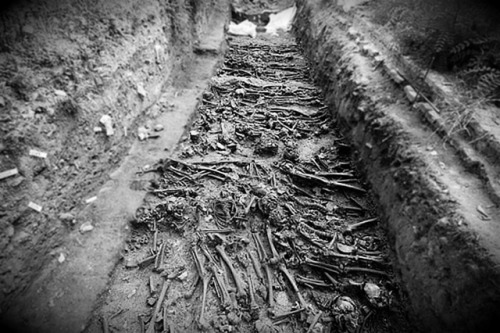 The dark history of Poveglia Island began during the Roman Era when it was used to isolate plague victims from the general population. Centuries later, when the Black Death rolled through Europe it served that purpose again. The dead were dumped into large pits and buried or burned. As the plague tightened its grip, the population began to panic and those residents showing the slightest sign of sickness were taken from their homes and to the island of Poveglia kicking and screaming and pleading. They were thrown onto piles of rotting corpses and set ablaze. Men, women, children… all left to die in agony. It’s estimated that the tiny island saw as many as 160,000 bodies during this time.

The island has become a putrid area indeed. The soil of the island combined with the charred remains of the bodies dumped there creating a thick layer of sticky ash. The core of the island is literally human remains that has given the island a loathsome reputation, but appears to be very good for the grapevines that are planted there. Think about that next time you partake of Italian wine!

As if the story was not disturbing enough, it gets worse. In 1922 the island became home to a psychiatric hospital complete with a large and very impressive bell tower. The patients of this hospital immediately began to report that they would see ghosts of plague victims on the island and that they would be kept up at night hearing the tortured wails of the suffering spirits. Because they were already considered mad by the hospital staff, these complaints were largely ignored.

To add to the anguish of the poor souls populating this island hospital, one doctor there decided to make a name for himself by experimenting on his subjects all to find a cure for insanity. Lobotomies were performed on his pitiable patients using crude tools like hand drills, chisels, and hammers. Those patients and even the ones who were not privy to the doctor’s special attentions were taken to the bell tower where they were tortured and subjected to a number of inhumane horrors.

According to the lore, after many years of performing these immoral acts, the evil doctor began to see the tortured plague ridden spirits of Poveglia Island himself. It is said that they led him to the bell tower where he jumped (or was thrown) to the grounds below. The fall did not kill him according to a nurse who witnessed the event, but she related that as he lay on the ground writhing in pain, a mist came up out of the ground and choked him to death. It’s rumored that the doctor is bricked up in the hospital bell tower and on a still night, the bell can be heard tolling across the bay. The hospital closed down.

For a time, the Italian government owned the island, but it was later sold. That owner abandoned it in the 1960’s and was the last person to try and live there. A family recently sought to buy the island and build a holiday home on it but they left the first night there and refused to comment on what happened. The only fact that we do know is that their daughters face was ripped open and required fourteen stitches.

Today Poveglia is uninhabited and tourism to island is strictly forbidden. Every now and then the lapping waves on the shore uncover charred human bones.

Several psychics have visited the island the abandoned hospital, but all of them left scared to death of what they had sensed there. Every now and then daredevils dodge the police patrols to explore the island, but everyone who has made it there have refused to return saying that there is a heavy atmosphere of evil and they the screams and tortured moans that permeate the island make staying there unbearable.

One report from a misguided thrill seeker who fled the island says that after entering the abandoned hospital, a disembodied voice ordered them, “Leave immediately and do not return.”