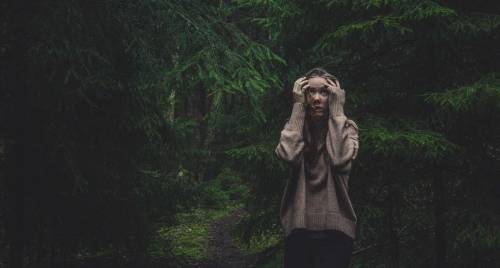 Panic in the Woods

Have you ever experienced a sudden surge of panic, fear and anxiety while venturing deep into the wilderness?

Have you experienced the increasing buzzing in your ears as insects take up the void left by the lack of other sounds?

Have you experienced the sudden deafening silence as all sound ceases to be?

Many people have felt this terror during times they have ventured into the secluded woods and forests one can find when they leave civilization behind. This terror is described as irrational due to its sudden onset, and the vast urges the afflicted will have to leave the area immediately. There never really seems to be a reason or a change in circumstance to bring this sudden panic on.

It is a fear of the wild itself, as if nature has an intelligence and does not want us there. A feeling of impending harm or insanity enough to drive us further from her.

What can cause this?

Is it a psychological effect from being secluded and away from our all too comfortable and familiar civilization or environment?

Is it a remnant part of our distant past buried in our psyche… a fear of being out in the open after dark and easy prey for predators?

Or is it in fact the gods and spirits of the wilderness driving us from these sacred and untouched areas, protecting the flora and fauna from potential harm?

Known as ‘PANic’ after the god ‘Pan’ (God of the wild, shepherds, wilderness, wilds and hunting among other things) this fear, that comes from seemingly nowhere, is documented on many paranormal websites and forums across the internet.

It has an almost superstitious ring to it, with this fear spoken of in folklore, especially across Europe. These tales talk of how it is the way the forests fight back against those who would come to do it harm. You can see these tales in more contemporary works, such as the Ents in The Lord of the Rings.

Along with the buzzing silence people have felt a dark presence or sinister force nearby. This force is said to shadow those who flee until they leave the secluded areas of the landscape.

This Panic will not just inflict itself upon the individual, but also whole groups who will all feel the same presence.