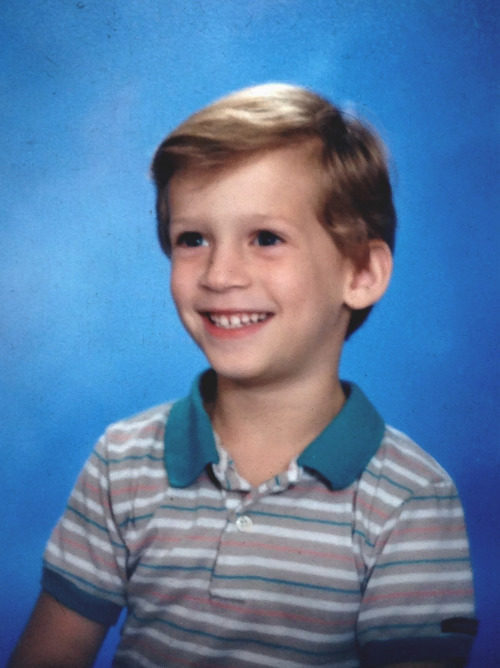 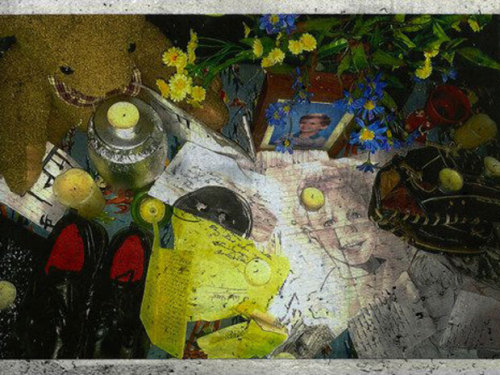 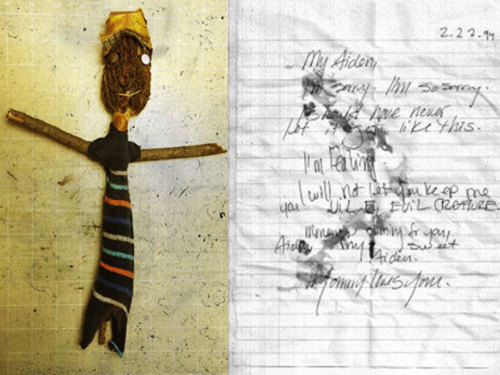 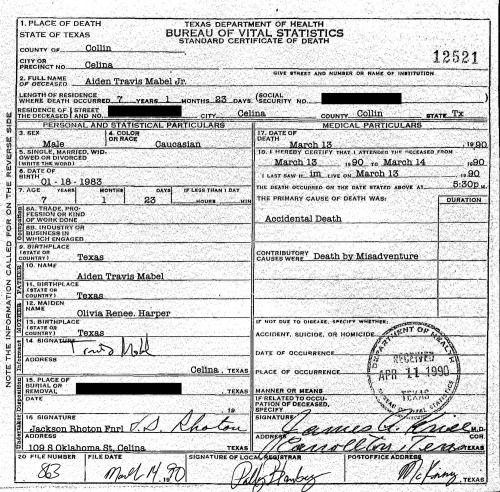 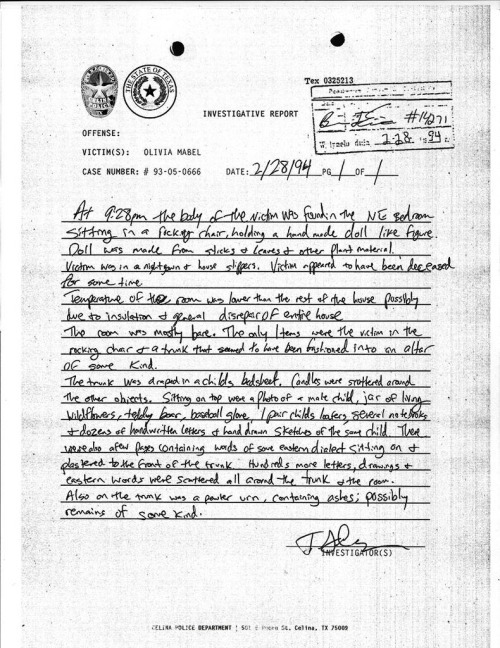 On the morning of March 13th, 1990 Olivia, Aiden, and husband Travis were at their home in Celina, TX. According to reports, Travis went to look for Travis after not hearing from him for an abnormal amount of time. Travis looked for Aiden in the family’s sprawling backyard and found the boy laying face-down in the small lake on the property. Aiden was dead.

After Aiden’s death Travis and Olivia grew apart and Olivia became increasingly reclusive. Travis ultimately moved out of the Celina home, but Olivia stayed. In the years leading up to the discovery of her body in 1994, she was scarcely heard from or seen from.

On February 27th, 1994, Olivia’s body was found in her home. Police entered the residence after receiving several silent 911 calls from the house. She had seemingly been dead for months already and was sitting in front of a makeshift shrine in Aiden’s bedroom, which was the only room in the house that had been cleaned and cared for. In her hands she clutched a crude doll made from sticks and Aiden’s clothing. On the shrine was a cryptic note that read:

“My Aiden,
I’m sorry. I’m so sorry.
I should have never let it get like this.
I’m leaving.
I will not let you keep me
you ViLE, EViL CREATURE.
Mommy’s coming for you,
Aiden, my sweet
Aiden.
Mommy loves you.“

The altar was filled with letters and drawings as well as possessions of Aiden’s. On the front of the shrine was Sanskrit word that has not been printed in reports but apparently means “construct” or “to build”.

After Olivia Mabel’s shrine and cryptic note was discovered rumors began to circulate that Olivia had made a Tulpa, or mystical being born out of pure mental concentration and will. Some believe the Tulpa to be the “vile, evil creature” mentioned in Olivia’s note and that feeding the entity her own energy is what led to her death.

But Did Any Of It Happen?

While many actively believe or want to believe the bizarre story of Olivia Mabel, many have come to the conclusion that the whole story is a viral hoax or marketing for a movie in the works. Here is what is currently known:

A death certificate for Aiden Travis Mabel Jr. does exist, but its authenticity is unverified. It lists Aiden’s date of birth as 01/18/1983 and the date of death as 03/13/1990. The cause of death is listed as “Death by Misadventure”, a common term used for accidental deaths wherein only the deceased party was involved.

Aiden’s death certificate is signed by “Jackson Rhoton Earl(?)”, the supposed undertaker. While there is a Rhoton Funeral Home in Carrollton Texas, it is located around 40 minutes, driving, away from Celina and is in a different county than Celina. Even so, it is still possible that the body was taken to Rhoton, but whether Jackson Rhoton Earl ever existed is unknown.

Celina, Texas exists, but the address of the residence has been redacted from the few documents related to this case. Some reports claim that the home is now owned by one Christopher Hagen and has been put up for sale and has been on the market for 22 years. There are no current listings that fit the description of the Mabel’s 13 acre Ranch with a pond in the backyard in Celina, TX built before 1990.

No family members of the Mabels have ever been interviewed or contacted for information or insight into this case. Travis Mabel is possibly the most undocumented person in the story. Some report that he moved to New England and remarried before Olivia was found but no records or social media accounts can be linked to anyone that fits his age, name, or background.

Tulpas exist and are integral parts of certain mystic practices, but there is no evidence that Tulpas conjure evil entities that feed on energy nor is there evidence that Olivia had any knowledge of mystic practices. It is reported that before her reclusive period she was an avid christian churchgoer.

There are also very few pictures of those at the center of this story. Only one picture of Olivia is ever shown and only one photo of Aiden in used in articles about the Mabels. There are no pictures of Travis