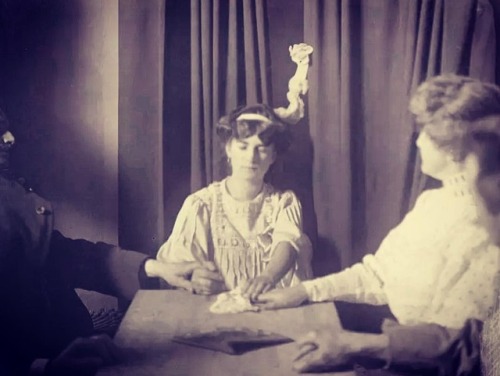 G. Simoni’s photograph depicting the young medium Linda Gazzera alongside a manifested ectoplasmic form. This photograph is from Dr. Enrico Imoda’s investigation of the medium that took place in a series of 100 séances between 1908-10, and featured in his posthumously-published work, Fotografie di Fantasmi.

A number of the séances in 1909 were conducted in Paris under the supervision of renowned psychiatrist Dr. Charles Richet, who won the Nobel Prize the year after the book debuted.

In his preface and in later writings, Richet insists that these photographs of Gazzera’s “ectoplasmic forms” depict true psychic phenomena, because the scientific protocols employed were too strict to allow trickery. But French occult researcher de Fortenoy, in his afterword to this volume, casts doubt on Gazzera’s mostly two-dimensional manifestations, and voiced the opinion that had Dr. Imoda lived longer, he would have come to share this suspicion. So it goes.