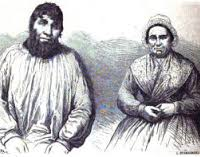 Martin Dumollard was a mass murderer that spread fear throughout France in the late-nineteenth-century. He was known as the Monster of Montluel and his crimes were made even worse due to the fact that he wasn’t acting alone, he was under the strict control of his mistress Justine Lafayette. The young and handsome Dumollard met Justine while in her Lyon boardinghouse and he instantly fell under her spell.

Both Martin and Justine were necrophilia’s, people who have sex with corpses. While horrifying, that’s not vampiric. The vampirism came into play when Dumollard murdered his victims and drank their blood. He didn’t stop there, once he had his fill he would then bring home the fleshiest portions of his kills to serve to Justine. So he was the vampire and she was the cannibal.

In spite of the terror and paranoia that spread through Montluel, Martin Dumollard was able to murder over eighty girls! Yes, he drank the blood of and murdered over eighty poor victims. Luckily he and his filthy mistress were caught in 1888. Justine was executed, she was guillotined.

He knelt for a moment on the lower steps of the scaffold, and the Abbe Beroud offered to his white lips the symbol of divine mercy. Then the executioners helped him up the remaining steps, tied him to the plank, pushed the latter to its place. Quick as lightning the axe descended, and in a few seconds head and body lay together in a rude coffin ; the body to be interred in an obscure nook of the cemetery at Montluel, the head to be sent to the phrenological professors at Lyons. There was scarcely time for a trace of blood to become visible. Never was the merciful death of the guillotine more skilfully administered. Never was death punishment more richly deserved, than by the French wolf, Dumollard

To this day Martin Dumollard is known as one of the most terrible of all of the so-called vampire killers.