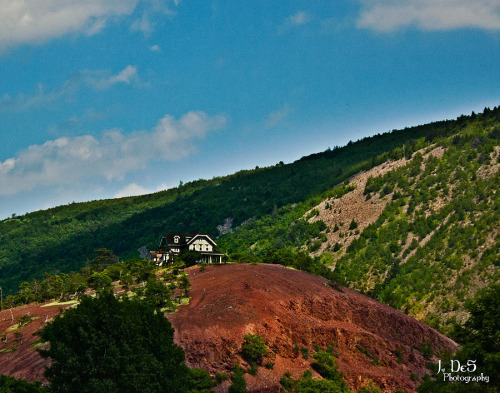 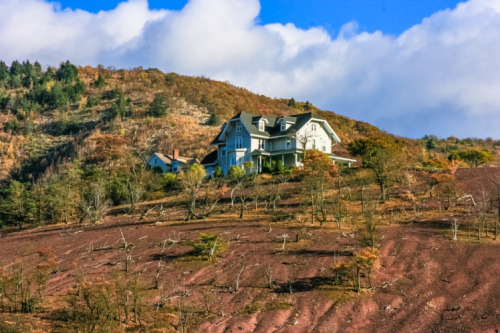 Not much is known about General Elisha Marshall and his second wife Janet Marshall Rutherford before they moved into their great Victorian mansion in Palmerton, PA. Marshall was a somewhat famous Union soldier in the Civil War, and Rutherford was a daughter of the prominent Rutherford family. No mention of their marriage was ever recorded, even in Marshall’s obituary, and the two lived in almost total isolation for the remainder of their lives.

Marshall commissioned his now infamous mansion to be built in 1881, atop a red shale hill in Palmerton, which has always been barren save a few small trees. The mansion overlooked the nearby paint ore mines that Rutherford’s family owned in the area. Today, the mansion overlooks the mine ruins and Route 248, from where the house can be easily viewed as you’re driving past. Over the years, the surrounding hills have grown lush with greenery after decades of pollution from the mine. Still, Marshall’s Mansion sits alone atop its red rock hill.

Marshall didn’t get to enjoy his odd creation for very long; he died in 1883. It was at this point that rumors began to swirl around his widow. Rutherford lived in complete seclusion on the hill. She closed and barred all the windows, and kept angry guard dogs around the house. No guests were welcome unless they had been very close friends with Rutherford. Her mail and supplies were delivered to her by the caretaker, Truxton Griffin. She almost never went into town, and closed her home for good after she was diagnosed with cancer in 1911, dying a short time after.

Several legends surround the home thanks to the strange behavior of Marshall and his hermit-like wife. People used to spread the tale that Rutherford murdered her husband and hid his body in secret slave tunnels below the house. She felt guilt for the rest of her life and so never left the home. Marshall actually died of Civil War injuries, having spent the majority of his life in constant pain from shell fragments still lodged in his body. He is buried in Rochester, New York. However, his body was disturbed by grave robbers in 2000, and his skull was stolen and the rest of his remains were thrown about the grave site. The groundskeeper and several investigators believed the head was taken for a satanic ritual, and the perpetrators have yet to be caught.

Some say Marshall’s Hill is cursed, because while many attempts have been made, barely anything will grow there. Further legends say the hill is red from Marshall’s blood. For decades, children would dare each other to visit this haunted house on a hill. The house was renovated in 1987 and is now a private residence.