Lady of the RiverWhat do you see when you look at this photo?… 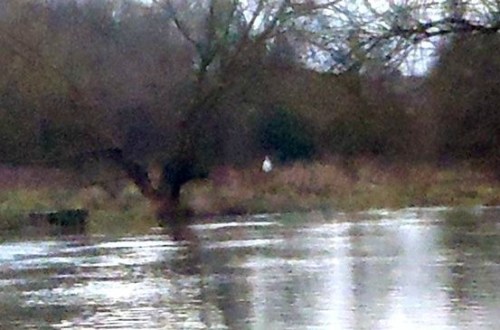 Lady of the River

What do you see when you look at this photo? Some believe the white figure is an ordinary person, but the man who took the picture isn’t so sure.

John Anderson snapped the photo along the banks of the River Trent in Burton, England. Anderson was fishing on a boat with his son when they noticed the silent figure.

“Whatever it was seemed to appear and disappear too quickly to be a person, so I don’t really know what it could have been,” Anderson told the BurtonMail. “I guess there are just some things out there that cannot be explained.”

According to a local psychic, the figure in the photo appears to be a young woman, and she’s standing in an area with a tragic past.

“That area particularly, close to Newton Road, has seen a lot of death over the years,” the psychic said. “There used to be a lot of witchcraft carried out in the areas, especially by Andressey Bridge. In the 17th and 18th centuries, there were a lot child sacrifices.”

This photo isn’t the first eerie image to emerge from the River Trent. Last July, another Burton man took this picture which seems to show a similar white figure lurking near the banks.

What do you make of the image? Do you think the figure in white is a ghost?

Lady of the RiverWhat do you see when you look at this photo?…