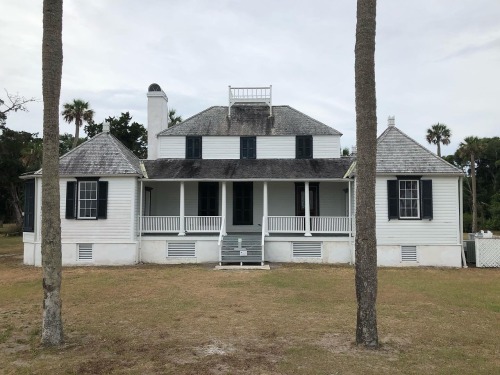 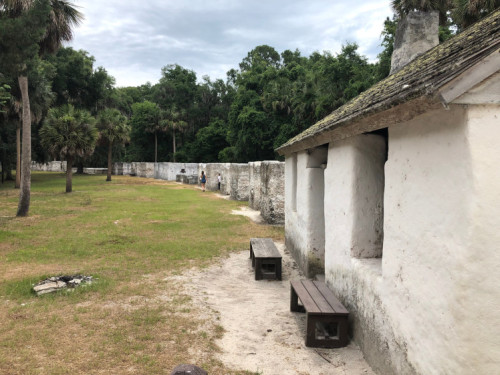 Kingsley Plantation, which dates to 1797, features Florida’s oldest standing slave plantation house, 23 slave residences, and associated buildings amid a pristine wetland on Fort George Island. From 1814 to 1837, it was run by the South’s most atypical slaveholders: Zephaniah Kingsley and his wife Anna Madgigine Jai, an enslaved Wolof teen he married and later freed. Their family included three other African wives and nine mixed-race children.

The Kingsleys were deeply invested in the Spanish system of slavery, which provided certain rights for free blacks as well as to the enslaved. After Florida became a U.S. territory in 1822, Kingsley lobbied against the new government’s increasingly restrictive laws governing both slavery and the position of free blacks, including his family. When these efforts failed, most of the Kingsley family moved to Haiti starting in 1835. Kingsley sold the Fort George Island plantation to his nephew Kingsley B. Gibbs 1839. Gibbs sold it in 1868 to the Rollins family, who held it until selling it to the Fort George Club in 1923. The state of Florida purchased the property in 1955 for use as a state park. The National Park Service took over in 1991 and the plantation became part of the Timucuan Ecological and Historic Preserve.

Like many other historic sites, Kingsley Plantation has accrued a considerable body of folklore. Legends that Kingsley Plantation is haunted spread just after it became a park, the site’s historic architecture and sublime surroundings encouraging ghost stories. In particular, dark, tree-lined Palmetto Avenue has long been a popular nighttime driving route, and in the 1950s was a well known local makeout spot, all but ensuring that scary stories will be told, retold, and remembered.

Additionally, the plantation’s status as a national park gives it a core of dedicated caretakers who foster its lore and pass it on to visitors. Park ranger Emily Palmer is one of those custodians. She regularly talks to guests about the supposed ghosts, even if she thinks the tales can mostly be debunked. For her, it’s a chance to help people connect with the space and its actual history. “Our big effort here is to protect this history and what is for so many people a spiritual site, and a connection with their ancestors,” said Palmer. “It’s so important to treat that with respect.”

Easily the most famous of the plantation ghosts is “Old Red Eyes,” said to appear as a pair of red, glowing eyes in the woods. According to researcher Alan Brown, the apparition has been spotted since 1978. One sighting frequently repeated in books on ghost lore was by a local woman named Tes Rais in 1993, and reports have come regularly ever since.

The story goes that Red Eyes was a slave who raped and murdered girls on the island. Sometimes his victims are claimed to have been the planter’s daughters, but far more commonly, they are said to have come from the enslaved population. According to this version, the other slaves discovered the crime and lynched Red Eyes from an oak tree beside the roadway. Thereafter, the villain remained to haunt the place as a malevolent spirit, stalking visitors from the trees.

No historical evidence supports the Red Eyes story. Accounts have a number of elements in common with other Southern ghost stories or haint tales associated with historic sites. Glowing eyes are fairly common attributes of ghosts, and the name “Old Red Eyes” is recorded as a folkloric nickname for the devil in South Carolina. Palmer believes there may be a more mundane explanation for the sightings. “Interestingly enough, along Palmetto Avenue we do have something hanging from the trees that would reflect bright red eyes if a brake light was shining in them,” she said. “They’re called possums. I believe that people have probably seen something of that sort… but I think it may have been a more natural explanation than what people are looking for.”

Another addition to the Red Eyes story circulating when I was young indicated that the ghost could be summoned by chanting his name three times. This variation of the “Bloody Mary” legend is clearly inspired by the 1992 film Candyman, in which a menacing ghost, in life the son of former slaves and a victim of lynching, is conjured similarly.

The depiction of Red Eyes’ crimes relies on some especially nasty old tropes. It hews very closely to the sensational and frequently implausible stories that early 20th century mobs used to rationalize lynching. Lynching was less about the particular victim than it was about stoking fear and shock among African Americans generally. Palmer notes that while lynching was not common in the plantation era, Jacksonville was no stranger to this type of violence in the period of Jim Crow. Seven lynchings are known to have occurred in Duval County between 1909 and 1924. “It was not a phenomenon of the plantation time period, but it’s definitely a legacy of that history,” she said. Unusual most popular version portrays Red Eyes’ deeds as crimes against and avenged by other slaves. This detail may reflect the idiosyncratic social dynamic of the Kingsley days, a legacy the park’s staff fastidiously memorialize.