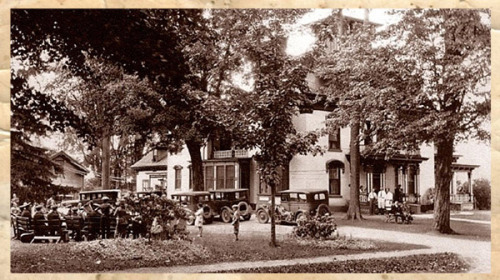 Built in 1818 by Captain Steve Keyes, the inn was also once used as a stop on the Underground Railroad for runaway slaves. Slaves would enter the house through a tunnel located at the edge of the river and hide in the basement until they could be moved to another location. The tunnel is still in existence to this day.

The mansion was owned by the Keyes family until 1870, when it was sold to Dr. Henry Baxter, who ran his medical office from the house. After several of his children failed to live past the age of ten, rumors ran rampant that Dr. Baxter was experimenting on his own children. The fact that they often died of strange illnesses compounded the rumors. Bloodstains can still be found on the floor of the library, which was once his medical office.

During the Prohibition days, Al Capone was a frequent visitor at the speakeasy that was hidden in the cave-like room in the basement that linked to the underground tunnels. A bar now resides there, named after the famous mobster. During its heyday in the 1940s, Big Bands often played at the vacation resort, including Benny Goodman. If you listen very hard during the darkest hour of the night, you might hear the melody still drifting on the wind.

Prior guests and staff were often startled as doors randomly opened and closed of their own accord,often directly in front of them. The previous owner would often find an old clock that once belonged to Dr. Baxter keeping time, despite the fact that it hadn’t been wound in years. Other guests reported loud banging sounds and footsteps in the middle of the night, something that couldn’t be explained by the light of day. Sadly, the inn was sold at auction in 2015, so visitors will need to wait for their chance to visit the inn.