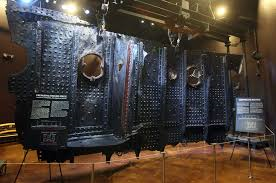 One of the most tragic maritime disasters happened on April 15, 1912. The passenger ship Titanic was on its maiden voyage crossing the North Atlantic Ocean when it struck an iceberg and sank.

More than 1,500 hundred passengers and crew members perished with the ship. In the years since this tragedy many strange stories have been told. The most recent involves the belief that the Titanic Exhibit is haunted.

This exhibit is housed in the Georgia Museum. It contains over 5,000 artifacts taken from the ocean floor. In recent years, 125 artifacts from this exhibit have been on tour across America.

As this exhibit has toured more and more witnesses have come forward to report the odd activity they experienced while they viewed this exhibit. Many have reported hearing disembodied voices, other stated they felt an eerie presence around them as they moved from one artifact to the next.

It is not uncommon for spirits to attach themselves to objects. Considering the trauma these passengers and crew faced it is not surprising that some of these items might be haunted.

One female visitor who brought her daughter and grandson to the Titanic Exhibit agrees. While they viewed the display of the 1st class quarters, her grandson pulled on their hands and questioned, “Who is that lady?” He then asked. “What is she doing?” The two women at first thought he was just referring to a dress that was displayed across a love seat. Later hearing other people’s stories they realized that he most likely saw a ghost.

Many others have reported feeling as if someone watched them as they moved around the various exhibits. They reported that they felt this presence strongest when they stood next to certain items. Later in comparing these reports it was discovered that the same artifacts had been the cause for these feelings. An old leather bag was just one of these.