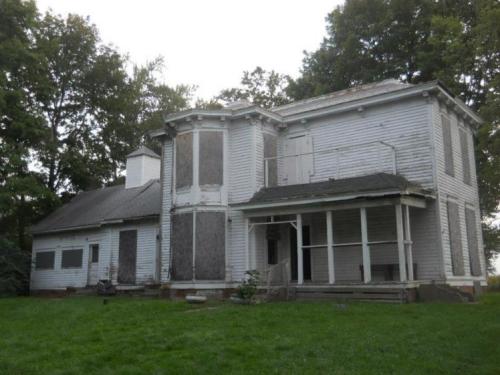 The Black Moon Manor in Greenfield, Indiana, is a 150+ year old house that sits on a hill, overlooking the city. It was built around 1860 by John C. Eastes. Over the decades, it has certainly seen its fair share of life and death. In the 1890s, it was owned by Dr. James, who took in many small pox patients.

Dr. James took care of people as best he could. He had hundreds of patients. Since he was the only doctor around, he had to watch the patients and contain the disease all by himself. Eventually, the disease took its toll on many of the patients and he was unable to save them. In order to keep the outbreak from spreading, the decision was made to bury the deceased in the back yard of the Black Moon Manor. The Manor was also used as a showing site for all who died in it, with the preparations and funerals held inside.

Hundreds of people passed away within the walls of the manor. Many of the old tombstones are still standing to this day. There was also a woman who passed away from hypothermia in the house during a blizzard. Some of the small pox victims were members of the Eastes family. Those who didn’t die of small pox still had rather unexpected and tragic deaths. One of the ghosts said to haunt the Black Moon Manor is five-year old Rachel Eastes, who was buried on the property.

In the 1930s, a woman allegedly committed suicide by throwing herself down the well, which still stands on the property.

The frozen death took place in the winter of the 1978, when the last member of the Eastes bloodline passed away in the corner of the room during a blizzard. Rescue workers couldn’t get to her in time. The locals refer to this event as the “Winter of ‘78”.

With all of the death and disease taking place in the manor over its 150 years of existence, it’s no wonder that it’s a hot spot for paranormal activity. It’s become one of the most haunted places in the Mid-West. Black Moon Manor is open to paranormal investigators who are interested in gathering evidence of hauntings.
Edit