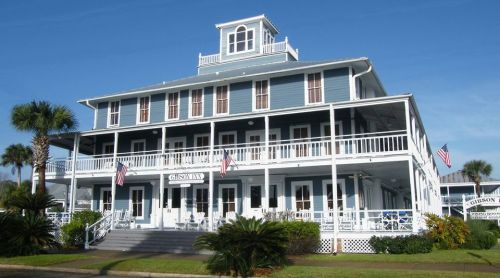 The ghost of Captain Wood haunts room 309. He died in that room from pneumonia after returning from sea. He moves shoes, tucks people into bed, and is generally considered to be friendly. Sunshine Gibson is believed to haunt the second floor. She is seen with her hair in a bun and wearing a long grey dress. She and her sister owned the hotel in the 1920’s. The front desk receives many phone calls from rooms that are unoccupied and from the kitchen phone which no longer works. The piano will sometimes play even though there is no one in the room. Footsteps are heard walking up and down the hallways.