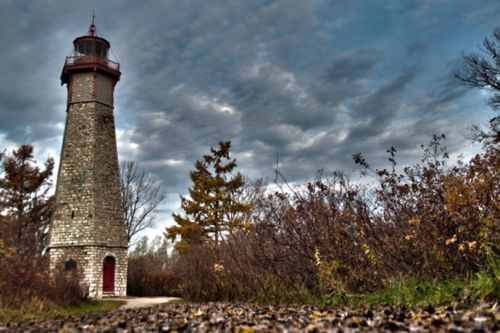 The haunting: This lighthouse was so-named because the governor at the time of its building thought it should be fortified as strong as the Rock of Gibraltar. The ghost here might be that of J. P. Radan Muller, the lighthouse’s first keeper, who supplemented his income as a bootlegger of American whiskey. In 1815, soldiers from Fort York came to the island in search of some of Muller’s whiskey. He obliged, but when they requested seconds, so the story goes, Muller refused and a fight ensued. Muller was never seen again, although it is assumed that he was murdered by the soldiers. The remains of a body were discovered in 1904 and reburied.

According to a 1958 short documentary about the lighthouse, workers and visitors have witnessed many forms of unexplained phenomena there, including lights in the windows where there should be none, the shadowy form of a man drifting across the sand in the moonlight, blood stains on the staircase, and an eerie moaning sound. Today, the lighthouse stands unused as a historical landmark.