ghostquest-usa: Here’s the 2nd story from my upcoming eBook,… 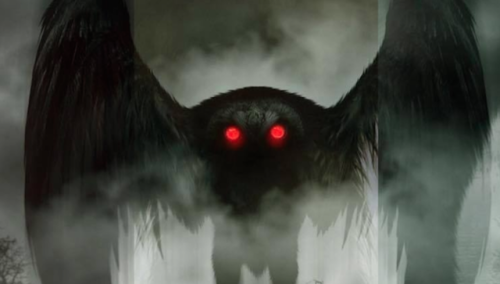 Here’s the 2nd story from my upcoming eBook, “Top 5 American Monsters,” available FREE when you subscribe to the GhostQuest.net monthly newsletter.

On November 16th, 1966 two young married couples from Point Pleasant, West Virginia reported encountering a large, winged, humanoid figure with glowing red eyes. When they reported it to a local newspaper called The Point Pleasant Register the following day, they described the figure as having a wingspan of over 10 feet (3+ meters), and a height between 6 and 9 feet (2-3 meters). In the police report filed by the group, they claim to have been driving down a rural road near an abandoned World War II munitions factory in Point Pleasant when they spotted something strange.

At first it appeared to be just a pair of eyes belonging to an animal in the road, but upon driving closer, the creature stood up, spread it’s giant wings, and began to fly alongside the car. The driver of the car sped up, but the creature kept pace easily, even when allegedly reaching speeds of over 100 miles per hour. Eventually though, the creature ceased it’s pursuit and the group was able to escape.

Another group of witnesses claim to have encountered the same, giant, humanoid bat-like creature three times that same night, and many more reports followed. They described the creature as looking like a moth in the headlights, and it was given the name, The Mothman.

Later that month, two men were out riding motorcycles and spotted a pair of strange red lights coming from the old munitions plant. They decided to investigate, and were horrified to encounter the same moth-like creature inside. The creature once again spread it’s enormous wings and retreated into the sky.

With more and more encounters with the alleged Mothman being reported to newspaper outlets and police stations, many theories began to circulate about the Mothman’s true nature.

One biologist at West Virginia University named Dr. Robert L. Smith theorized that The Mothman may actually be a Sandhill Crane, which has a wingspan of over 7 feet (2+ meters) and stands as tall as an average person. He went on to say that due to the creature not being native to the Point Pleasant area, locals wouldn’t have immediately recognized the bird, especially late at night.

Some speculated that The Mothman was some type of alien entity that arrived on earth for unknown reasons, while others were convinced the creature was the result of a top-secret government experiment that had gone wrong. During this time, there was also an increase in UFO reports and sightings in the Point Pleasant area.

But as time went by, more encounters were still being reported. To add another layer of mystery, many who reported coming face to face with The Mothman also began to report having strange recurring nightmares, with many reporting extreme anxiety and psychological distress lasting for months.

One such woman, named Mrs. Marcella Bennet, reported having frightening nightmares about The Mothman for months after the encounter, resulting in acute episodes of anxiety and paranoia. These feelings of paranoia became so unbearable that she eventually was forced to seek medical attention from a psychologist.

One woman reported having strange dreams of Christmas presents floating in a river, which turned out to be an omen of what was coming next.

After a year of sightings, The Mothman hysteria finally came to an end at around 5:00pm on December 15th, 1967 when the Silver Bridge, which connects Point Pleasant to Gallipolis Ohio, collapsed into the Ohio River below. The event killed 46 motorists who were stuck on the bridge during the rush-hour traffic, and dozens of others were injured.

Then, strangely enough, sightings of the Mothman stopped, and life returned to normal, with many speculating that The Mothman was some sort of omen sent to warn them of the catastrophe ahead.

ghostquest-usa: Here’s the 2nd story from my upcoming eBook,…