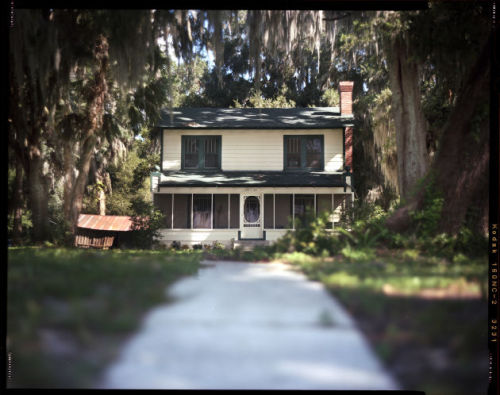 He called the newsroom with a warning: They can’t move that house.

“I’m worried something terrible is going to happen,” the man said in a thick New York accent. “I have to warn somebody.”

Then he told me a ghost story.

His name is Donald J. Weiss. He’s a 62-year-old retired police patrolman from upstate New York. He had moved to Ocala several years ago and visited the house where gangster Ma Barker had been killed. He had wanted to see the site of the longest shootout in FBI history: four hours, more than 2,000 bullets.

But when he wandered beneath the live oaks, a voice growled, “Get outta here, lawman!”

And when he took a photo of the front porch, a shadowy figure appeared.

“That woman is still in that house,” he told me. “And she’s pissed.”

He gave the photo to the Marion County Sheriff’s Office because he wanted to enter it into evidence. And because bad things started happening as soon as he had blown up the print. “I had a heart attack,” he said. “You think that’s a coincidence?”

The property has been sold, he told me. County officials want to move the house.

“They have no idea who or what is in there,” Weiss said. “That woman has the power to do a lot of things. We are dealing with the afterworld here.”

I thanked the caller for his concern.

“When are they moving it?” I asked.

He paused, as if to make a point, then said gravely, “By Halloween.”

Reporters get a lot of crazy calls. Many might have dismissed this one. But I knew this house, and so did my photographer friend John Pendygraft.

“Hey John,” I called across the cubicle wall. “Do you remember that story we did on the Ma Barker house?”

John’s eyes got big. “Do you remember what happened?”

Our story four years ago had been about real estate: historic home for sale on nine waterfront acres, eight miles north of the Villages, two hours from Tampa. And about the gangsters who hid out there until the end.

We had toured the four-bedroom house with a Realtor, whose assistant shivered and said, “I get the weirdest feeling when I’m in here.” We had reported rumors about flickering lights and an unsuccessful exorcism.

But we hadn’t written about what had happened to John. Or what he saw when he enlarged one of his pictures.

John has worked in war zones in Afghanistan and the Gaza Strip. He has photographed the dead from an Asian tsunami, a Mexican assassination and Hurricane Katrina. If he ever is scared, he won’t show it.

That fall day in 2012, in the Ma Barker house, he had gone alone into the front bedroom to take pictures through the window, looking out toward the lake where the FBI agents had crouched behind trees.

All of a sudden, John rushed out, cameras, lights, tripod flapping over his shoulders, nearly sliding down the 13 stairs. “I don’t know what happened, or what that was,” he panted. He heard the mattress fall, then saw it, dangling through the bed frame. “I didn’t touch it,” he insisted.

We left that afternoon, as dusk began to descend. From beneath the Spanish moss, John shot a few final frames. The next day, when he zoomed in on his laptop, he saw a strange figure on the screened porch: The silhouette of a stout woman with a bun, who looked like she was holding a machine gun.

Her story starts in Missouri, in 1873. Her parents named her Arizona Donnie Clark. She and a farmhand, George Barker, had four sons. As soon as the boys were grown, her husband left.

Legends vary about Ma Barker’s role in her boys’ gang. Some say she just cooked and cleaned. Others say she was the mastermind.

They began by robbing banks, then murdered a policeman. From 1910 through 1930, they are said to have stolen $2 million. And killed at least 10 people.

The FBI’s first director, J. Edgar Hoover, called them “the worst criminals in the entire country.” Ma Barker became the only woman to top the most wanted list.

In 1934, the gang split and went into hiding. One son fled to Chicago. Ma and her favorite son, baby Freddie, moved to Miami where, posing as a wealthy widow, she asked if anyone knew a secluded spot where she could spend the winter.

Someone introduced her to Carson Bradford, whose family had a lovely home in the center of Florida, on Lake Weir.

The house sounded perfect: fully furnished, set back from the road, with a boat tethered to a dock out back. Ma paid the full season’s rent in cash. Just before Thanksgiving, she moved in with Freddie and a couple of his friends.

In a letter to her son Arthur in Chicago, she drew a map of the lake and circled the closest town, Ocala. She mailed it from Ocklawaha’s little post office.

FBI agents found Arthur the following January, and with him, the letter, which led them to Ma’s hideout.

In the predawn darkness on Jan. 16, 1935, a dozen officers pointed their guns at the upstairs windows. “This is the FBI,” an officer shouted, according to an agency report. “You are surrounded.”

Some say the gun battle lasted as long as six hours.

When it was over, they found Freddie, 32, shot in the back of his head. Ma, 63, was curled on the floor, cradling her Tommy gun. That day, Hoover said, marked “the end of an era of violence.”

For nine months, the corpses lay unclaimed. Finally, a relative moved them closer to home.

But some say Ma still inhabits that two-story, cream-colored house with forest green shutters. The cop on the phone, my friend the photographer, the former and current owner all saw, heard or felt … something.

But how do you report a ghost story?

I started with the Marion County Sheriff’s Office and that “evidence” photo the retired cop mentioned on the phone.

Lt. Dave Redmond remembered some man bringing in the photo, but the deputy hadn’t seen anything in it.

Records only go back to 1990, said department spokeswoman Lauren Lettelier. “But since then, there have been no reports of hauntings at that house.”

I talked to Carson Good, 47, the great-grandson of the man who built the house. He has memories of swimming and sailing in the lake. And of countless sleepless nights, cringing in the dark. “I’m not a big believer of ghosts, but I heard a lot of sounds in that house,” he said. “Voices. Furniture moving. People walking up and down the wooden stairs.”

His grandmother didn’t like to talk about it, but she often heard spirits stirring. Years ago, he said, a psychic from Cassadaga held a seance at the house and convinced the ghost of Freddie Barker to move on. But the medium said Ma refused to move.

Good and his family sold the property for $750,000 and donated the house to the county, which hired a contractor to lift the home off its foundation and float it across Lake Weir to a park called Carney Island. County commissioners allocated $270,000 for the move. Private donations and fundraising will finance the museum.

County tax collector George Albright, who grew up next to the storied house, envisions an homage to the early days of the FBI, as agents set out to capture notorious gangsters like “Baby Face” Nelson, “Pretty Boy” Floyd, Bonnie and Clyde and, of course, the infamous Barker gang.

“We’ve already had calls from people asking about ghost tours. If they want something like that, or to hold seances, we’ll look into that,” said the tax collector, “as a revenue source.”

Some say the gang buried Mason jars filled with cash along the lake. Local children used to spend summers digging for the treasure, but came up with shovels full of sand.

As soon as the home is removed, before the new owner closes on the land, the tax collector plans to bring in a team with ground-penetrating radar to scan the soil.

On a gray Wednesday in October, more than 81 years after the shootout, John and I returned to the scene. The house already had been lifted on jacks. The screened porch was gone; workers were carrying out lamps. A true-crime novelist was parked in an SUV, taking pictures.

Like John, he swore he had seen a face in a window.

“I think whatever’s in there doesn’t want us to come in,” said Tony Stewart, who had driven from Indiana to see the house in its original setting. “And it won’t come out.”

We had told the retired cop that we would meet him later. The tax collector didn’t want anyone else at the construction site. But Weiss pulled up in his white Cadillac, quaking in his tassled loafers.

“This is where their bodies were. They dragged ‘em right down this driveway,” said Weiss, clasping his arms across his chest. “She’s not at rest. She will never leave this property.”

He has felt this before, he said. “I sense spirits.”

The first time was in 1992, just before Christmas. He was on patrol in White Plains, N.Y., resting in his car between calls, when he had a vision of a sad teenage boy: long hair, pale, with a pug nose. Two days later, he was sent to a home where a teenage boy had hanged himself. “The same boy I’d seen.”