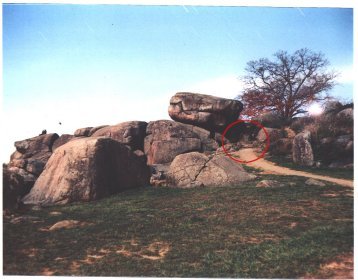 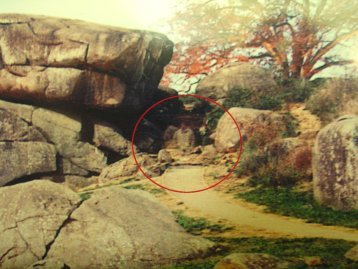 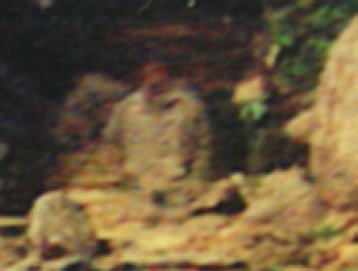 I took this picture 11-09-2008 at devil’s den in Gettysburg. It was cold ,40-45 degree’s. This is a night photo! 6-8 min exposure, mostly clear, few cloud’s, full moon . I used an old 35mm camera that you can set shutter speed, set on b, full opening, used tripod, shutter release cable. I was hoping at least to get streaking orb’s / energy light’s/ecto . When I saw I got a half body apparition, I couldn’t believe it! It look’s like he’s posing, look’s like he has a dark hat on, mustache, if it was  a living person they would have to stand still for at least 10 sec’s to several min’s to be seen, and their leg’s would show as well their whole body. I scanned original 4×6, and 8×10 but they came out too dark, I played with contrast& brightness a little on full pic before scanning, 2nd pic close-up was taken of 8×10 pic under lamp. Ignore 2 figure’s on rock’s, just tourist’s. Bright spot on upper right is camera flashes’. There were no reenactor’s around, and I didn’t see anybody walk down from the rock’s. I never got anything more than orb’s in 12 yr’s of taking pic’s at devil’s den, not even ecto. This is my best ghost pic at Gettysburg yet, I wish I got his leg’s, and was closer to me, and took more than one shot. This is not photoshopped or, altered in any way. This is the real deal, believe it or not !