Galileo’s Middle FingerThe finger was removed by one Anton… 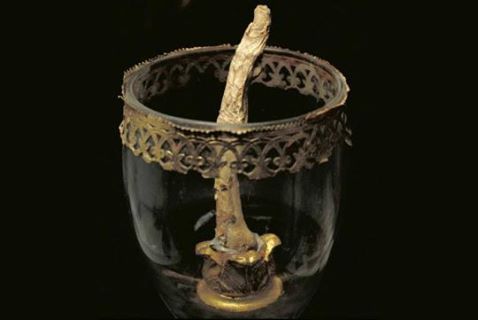 The finger was removed by one Anton Francesco Gori on March 12, 1737, 95 years after Galileo’s death. It now sits in the Florence History of Science Museum.

As with a fine wine, it took some years for Galileo’s finger to age into something worth snapping off his skeletal hand. The finger was removed by one Anton Francesco Gori on March 12, 1737, 95 years after Galileo’s death. Passed around for a couple hundred years it finally came to rest in the Florence History of Science Museum.

In 2009 two more fingers and a tooth belonging to Galileo were discovered at an auction. The spare parts had disappeared in 1905, not seen for 100 years. But then the purchaser was able to deduce their origin, and has returned them to the Science Museum where they match a detailed description from when they were last seen.

Today the middle finger sits in a small glass egg among lodestones and telescopes, the only human fragment in a museum devoted entirely to scientific instruments. It is hard to know how Galileo would have felt about the final resting place of his finger. Whether the finger points upwards to the sky, where Galileo glimpsed the glory of the universe and saw God in mathematics, or if it sits eternally defiant to the church that condemned him, is for the viewer to decide.
Galileo’s middle finger has since been joined by his index finger, thumb, and tooth enclosed in a bell jar.

Galileo’s Middle FingerThe finger was removed by one Anton…