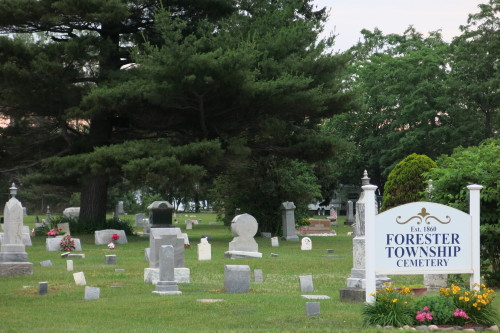 ​​The Forester Township #Cemetery in #Forester Township, #Michigan was established in 1860, and is believed to be #haunted by the #spirits of several young children who were killed in the Michigan Thumb #Fire of 1891. Over the course of several days in early September of 1891 a massive inferno engulfed over one million acres of eastern Michigan, destroying over 2,000 homes and public buildings, and claiming the lives of almost 300 people. Numerous residents of Forester Township who were killed in the tragic fire were buried in Forester Township Cemetery, including the Wilson family who had seven children. It’s believed to be the Wilson children who haunt the old cemetery, where visitors frequently report witnessing #apparitions, and hearing the disembodied sounds of children’s voices laughing and playing. Forester Township Cemetery is also the final resting place of a young woman named Mary Jane “Minnie” Quay, who committed #suicide in April of 1876 at the age of 14, and whose restless #ghost is said to haunt the shoreline of the nearby Lake Huron where she died. Her #grave is often decorated with trinkets and coins left as offerings by locals and other #folklore enthusiasts, who claim to encounter her spectral figure at night, and hear the sounds of her mournful sobbing and cries.