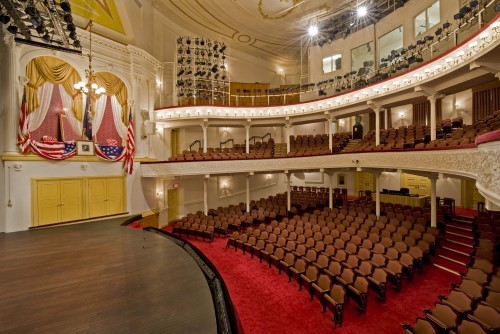 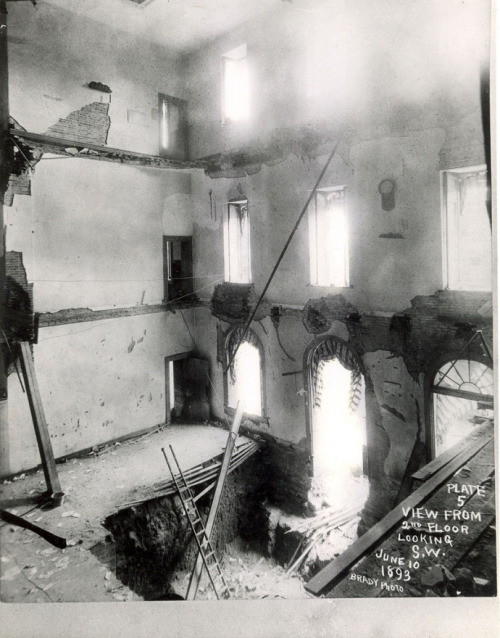 On the night of April 14, 1865 John Wilkes Booth an actor by trade entered the state box at Ford’s Theatre in Washington D.C. and shot Abraham Lincoln in the head.

He then vaulted over the railing and jumped down to the stage. Even though he broke his leg as he did this he managed to escape through the theatre’s back alley–known as Baptists’ Alley. While still in the theatre he yelled out, “Sic semper tyrannis” meaning–thus ever to tyrants.

Just five days before this General Lee of the Confederate army had surrendered in Virginia ending the American Civil War.

Abraham Lincoln the 16th president of the United States had accompanied his wife, Mary Todd Lincoln that night to see a play, “Our American Cousin”.

When Booth, a Confederate sympathizer shot Lincoln Mary Todd screamed and pointed toward the stage. Other screams of “murder” rang out throughout the theatre.

Lincoln was rushed across the street to what was then Petersen’s Boarding House and placed upon a bed. He died the following morning at 7:22. He never regained consciousness.

After riding and searching for 24 continuous hours the soldiers of the 16th New York Calvary surrounded the barn, set it on fire and started to shoot.

Booth’s eight co-conspirators were found later. Some were hanged, one unjustly, others where given prison sentences only to die in prison or were pardoned later and one was never convicted.

Abraham Lincoln was the first American president to be assassinated. After he was shot Ford’s Theatre was immediately shut down.

The United States government purchased the building and used it for storage, an Army Medical Museum, and then as a library for the Surgeon General’s office. By 1887 it was being used by the War Department as a clerk’s office.

In June of 1893 another tragedy struck the building. It’s 3 upper floors collapsed killing 22 clerks and injuring another 100 government employees.

After this accident rumors started to circulate that the building was cursed. So it once again was used just for government storage. After 193l it sat unused.

Then in 1964 the U.S. Congress approved its restoration. In 1968 the building once again opened its doors as a theatre.

Its basement was converted into a museum in honor of Abraham Lincoln. This museum contains artifacts from the Lincoln Assassination, including the derringer Booth used to shoot Lincoln and the coat Lincoln wore to the performance.

This theatre, along with the Petersen House across the street is now preserved as a National Historic Site.

According to numerous witnesses, the building’s tragic events in 1865 still play out even today. People report hearing disembodied footsteps rushing into the state box, followed by a loud gunshot and screams.

The ghost of Mary Todd has been seen leaning over Box 7’s railing and pointing toward the stage. Some have heard her cry out, “He has killed the president.”

John Wilkes Booth is believed to haunt the stage area at Ford’s Theatre. According to many actors who have worked in productions at the theatre one particular spot on the stage located at center-left is always icy cold.

In fact, several of these witnesses state that when they try to deliver their lines from this spot they became ill, even nauseous or they began to shake violently.

Others have seen Booth’s ghost running across the stage just as he did the night he assassinated Lincoln.

Some state Lincoln haunts Ford’s Theatre but his apparition is seen more often at the Petersen House across the street where he died. His ghost is also seen at the White House. I talk about this in another post here.

Before Ford’s Theatre closed in 2007 for major renovations, I took groups of around 100 teenage students over several Spring Breaks to tour Washington D.C., Ford’s Theatre was always one of our stops. We always ended up in the basement in the long lines waiting for the single stall restrooms.