fectusing: ‘Robert’ is a haunted doll that was the inspiration… 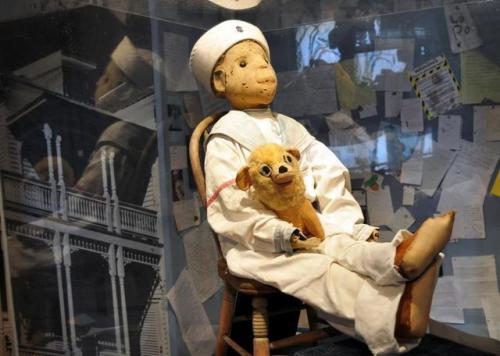 ‘Robert’ is a haunted doll that was the inspiration for Chucky in the 1988 movie Child’s Play. Robert was created in the 1880s by Thomas Otto, and resembles an early 20th-century American sailor. Otto was a wealthy tyrannical racist who owned a lot of servants, and reportedly a Haitian servant wanted revenge for the cruel treatment she received: She was appointed to take care of the Otto’s son, Robert, and one day Mrs. Otto walked in on her practising black magic and fired her. Before she left, the woman gave Robert this creepy doll that contained human hair (believed to be Robert’s), and was filled with straw. After several months, odd things started happening. Ornaments would fly off shelves, chairs would levitate and the doll would move from room to room of it’s own accord. Terrified, Robert was sold on to buyer after buyer, but he never settled in a home due to his curse. He is now displayed at the East Martello Museum where he is kept in a locked box for the public’s safety.

fectusing: ‘Robert’ is a haunted doll that was the inspiration…