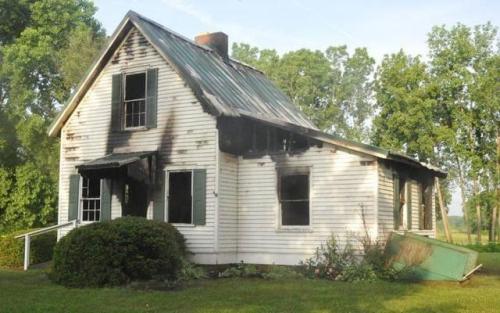 In the mid to late 1800s, Waverly, Ohio’s way of life was heavily influenced by one man named James E. Emmitt. He was the town’s main entrepreneur and self described first millionaire, earning his wealthy from hauling grain, operating a mill, making whiskey and “Emmitt’s Discovery”. He “discovered” his snake oil cure-all after a mule kicked a can of fuel in to a vat of spirits. Why he would want to drink it much less sell it is beyond anyone’s understand.

Using his influence, the county seat moved from Piketon to Waverly. The Ohio and Erie Canal route was changed as well. If he didn’t already have his hands full, Emmitt decided to build a restaurant/hotel on the site of a former hotel owned by one of his former business partners. The original wooden hotel was built in 1850. A fire killed 3 people and destroyed much of the structure.

In 1861, Emmitt rebuilt the hotel using bricks, hiring a man named Madison Hemings to do the construction. Hemings is believed to have been the illegitimate son of Thomas Jefferson by a slave woman named Sally Hemings. Whether this is true or not, it is uncertain. The hotel became popular among the salesmen, travelers and workmen. James Emmitt died in 1893 at the age 87 after losing much of his fortune. His hotel continued operating after his death in one form or another. It is also believed former visitors and owner have never left.

Stories about the hotel dictate it may have been a stop on the Underground Railroad. The discovery of bricked over hidden rooms and maze-like features of the basement support this rumor to be actually fact. Is it possible the spirits employees and guests encounter in that part of the hotel be that of slaves who died en route to freedom? There are also rumors it may have operated as a gentleman’s club at some point.

James E. Emmitt has been seen but smelled mostly. Witnesses have reported smelling cigar smoke so often cigars are routinely left for him. Some have seen an elderly female spirit wearing an old-fashioned apron, cleaning things. Two children believed to be members of the Harper family roam the building. The family stayed at Emmitt House and was nearly wiped out by smallpox, the disease that killed many people in the town including two of Emmitt’s children. Other paranormal reports include voices, shadows and lights from unknown sources. It is not certain if these are the only spirits allegedly haunting Emmitt House.